Daniel Negreanu has hit out at former World Series of Poker (WSOP) commissioner Jeffrey Pollack over his condescending attitude towards poker players. 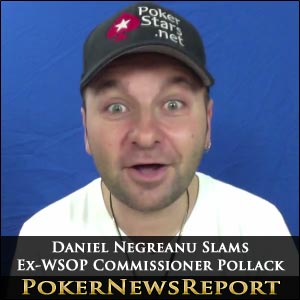 Daniel Negreanu has hit out at former World Series of Poker (WSOP) commissioner Jeffrey Pollack over his condescending attitude towards poker players.

Canadian superstar Negreanu is renowned for his forthright opinions when releasing his regular video blogs and his latest rant includes a particularly scathing attack on Pollack’s lack of understanding of poker players.

The 37-year-old Team PokerStars Pro certainly didn’t hold back, accusing Pollack – who was the managing director of broadcasting and new media for the National Association for Stock Car Auto Racing (NASCAR) before taking up his role with the WSOP – of displaying a distinct arrogance when dealing with poker and the game’s players.

However, ‘Kid Poker’ did have some much kinder words for Ty Stewart after the WSOP executive director made the money at this summer’s opening event, the $500 buy-in Casino Employees tournament, in Las Vegas.

Negreanu – a four-time WSOP bracelet winner – started off his latest rant fairly calmly, discussing his first outing at the 43rd staging of the world’s biggest poker festival when he crashed out on Day 1 of event #2, a $1,500 buy-in No-Limit Hold’em tournament, saying:

Today was the first day of the World Series of Poker. I did not fare too well, but I promise you I brought it – it was A game, all A game. I didn’t last past level four. It was one of those $1,500 No-Limits. You need to get really lucky – I didn’t. But I thought I played really well. I actually tried in a $1,500 No-Limit for the first time in, I don’t know. I usually don’t play them anyway, so I was proud of myself.

The poker legend then went on to talk about his admiration for Stewart after the WSOP director put on his poker-playing hat to get down and dirty with the other players at the Rio All-Suite and Hotel & Casino, adding:

One thing I did find interesting, though, was I saw Ty Stewart dressed down, kinda scrubby, looking like a poker player. And, you know why? Because he was a poker play for the day, coming in 19th place in the Casino Employees event.

Now, Ty Stewart, for those of you who don’t know, has been behind some of the advances at the World Series of Poker – one of the key guys there in terms of a vision for the November Nine and other things along those lines. He’s a guy that definitely listens to the players.

Pollack Gets It In The Neck

However, it was at this point that Negreanu began to seethe with unbridled loathing for Pollack over his perceived lack of interest in poker and its players, saying:

And I think him (Stewart) playing in this event just goes a long way to creating a bond with the players. Because the truth is, unless you’ve been in the grind at the World Series of Poker, you don’t know – you don’t know what the players want.

You think you know. If you think you’re better than us, Jeffrey Pollack, talking to you. This is the beef I have with Jeffrey Pollack – he never played a hand of poker. He didn’t want to know if a flush beat a straight. ‘Well, when I was at NASCAR, I didn’t drive race cars’.

Will Daniel Talk About Toilets?

Having got that off his chest, Negreanu returned to praise Stewart for his participation in this year’s WSOP, adding: So good on Ty Stewart for finally getting his feet wet at the World Series of Poker and having a go at it.

Negreanu, of course, discussed other issues – most notably his fantasy draught for this WSOP. However, nothing quite compares to a Negreanu rant, so it will be interesting to see if the sometimes-critical Canadian weighs in on the current controversy at this year’s WSOP – namely fellow Team PokerStars Pro Vanessa Selbst’s concerns over the lack of toilet facilities for women at the Amazon Room in the Rio…