Daniel Negreanu couldn’t quite complete his journey into South America with victory at the PokerStars Latin American Poker Tour (LAPT) São Paulo as he crashed out in sixth place. 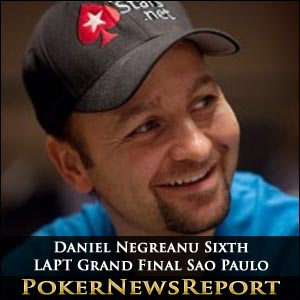 Daniel Negreanu couldn’t quite complete his journey into South America with victory at the PokerStars Latin American Poker Tour (LAPT) São Paulo as he crashed out in sixth place.

However, the Canadian superstar surely enjoyed his trip south from Toronto as the LAPT’s final event of season four ran alongside the colourful and chaotic Carnival that attracts thousands of visitors every year.

That certainly proved the case in the R$4,000 buy-in main event of the Grand Final as 376 players – including several from Europe – signed up for the four-day event that was ultimately won by Germany’s Daniele Nestola.

Certainly, Negreanu happily chatted with the gathered railbirds, played good poker and came close to adding yet another title to his already-impressive resume.

However, the 37-year-old four-time World Series of Poker (WSOP) bracelet winner did manage to create a small piece of history by becoming the first pro to reach the final table of events on the European Poker Tour (EPT), Asian Pacific Poker Tour (APPT) and now the LAPT.

But the day belonged to Nestola as he outlasted a big field to eventually see off Venezuela’s Gasperino Nicolas in their heads-up clash that provided the German with a R$289,300 top prize.

Nestola started the eight-handed final table as chip leader and dominated as he eliminated four of his opponents, including Nicolas in their head-to-head after also taking care of Ibarra.

While the Chilean was picking up his cash for third place, Nicolas and Nestola agreed to chop the remaining R$500,000 in the prize pool but play for the extra R$39,300.

But their heads-up clash didn’t last long as the German claimed the title, with the final hand starting off with an innocent-looking limped pre-flop pot.

The 3c turn completed the German’s straight, resulting in all the chips landing in the middle. Nicolas was already beaten, though, before the A♥ arrived on the river – and that was the cue for Nestola and his friends to begin partying the night away.

The other two players in the hand folded quickly, but Nestola made the call to reveal his hole cards of 5♦ 5♣. The flop came Q♥ 6♣ 5♠ to give the German trip fives, while the K♠ on the turn provided the Argentinian with top pair.

That was not good enough, of course, especially when the 5♥ made it quads for Nestola.

The last home player, Torres, was next to hit the rail in seventh place when his A♦ 8♦ ran into the K♦ K♠ of Morbiducci.

The short-stacked Brazilian shoved all-in and was called by the Chilean to see a flop of K♥ 2♠ 2♦. That was not what he wanted to see as Morbiducci made trip kings to send Torres home slightly disappointed with his R$35,560 payout.

Negreanu was now down to about 25 big blinds when the second level of the final day arrived – and could not survive in a pot with Ibarra.

The Canadian star raised pre-flop before the Chilean, in late position, called to see a flop of 10♦ 9♠ 3♥.

Negreanu continued his aggressive play as he attempted to double-up by betting 102,000, only for Ibarra to raise that to 300,000, effectively putting the Canuck all-in.

Negreanu Loses Out to Trip Aces

The 7♠ turn changed nothing while the A♣ on the river gave Ibarra trips to send Negreanu out in sixth place and move the Chilean closer to chip leader Nestola.

Ibarra and Nestola swapped the chip lead a few times before the German once again stretched away when eliminating Markovits in fifth place.

Nestola picked up A♠ A♥ as the short-stacked Ecuadorean shoved all-in with A♣ J♣, but failed to improve on the board to hit the rail for R$64,540.

Fourth place went to Morbiducci as Nestola claimed another victim when they got all the chips in pre-flop.

Morbiducci showed K♠ 7♣ to be dominated by the K♥ 8♥ of Nestola, but did take the lead with a pair of sevens on a flop of A♠ 7♠ 5♦ flop, only for the 8♦ turn to move the eventual champion back into the lead. The 9♦ river was a blank and that was that for Morbiducci as play became three-handed.

That was when Nicolas really started to make his move for the top prize, although that failed dramatically after he had managed to wrest the chip lead away from Nestola for a short time.

Incredibly, A♠ A♥ arrived for a third time as Nestola chopped Nicolas back down, before the latter sent Ibarra to the rail in third place.

The short-stacked Chile star made a huge bluff when shoving with 7♣ 8♦ on a flop that showed K♣ Q♦ 5♥. However, Nicolas revealed A♠ K♥ for top pair – and that left us with a heads-up battle for the top prize.