Canadian superstar Daniel ‘KidPoker’ Negreanu was wiped out in the weekend’s inaugural Limit Hold’em Challenge by his German opponent ‘rUaBot’. 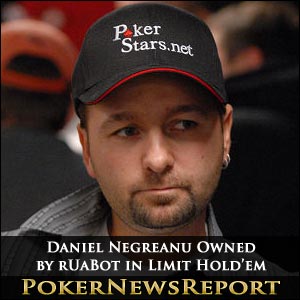 Canadian superstar Daniel ‘KidPoker’ Negreanu was wiped out in the weekend’s inaugural Limit Hold’em Challenge by his German opponent ‘rUaBot’.

While the $200/$400 limit heads-up clash was slated to take place over 1,250 hands, Kid Poker could not last that long as his $75,000 starting bankroll was nabbed by the online specialist after just over fours and 937 hands.

The Team PokerStars Pro certainly enjoyed little luck as he saw river after river go against him in the high stakes poker game played over two tables – although the victorious ‘rUaBot’ was more than happy to acknowledge that he had run hot when it mattered most.

In fact, the four-time World Series of Poker (WSOP) champ and his internet ‘enemy’ chatted for a short while after the final hand of the event. Their brief chat went like this:

rUaBot: sorry for the sick run

KidPoker: its ok just glad its over!

KidPoker: have never in my life played 2 tables HU LH and I never will again

rUaBot: big thanks for playing here

That meant Negreanu was now well below his starting stack of $75,000 and in serious danger of being eclipsed in far fewer hands than had been planned for this first of several Limit Hold’em Challenges.

Negreanu’s frustration only increased, though, over the next few hundred hands as ‘rUaBot’ staved off his attempts to turn the tables – with the river card now becoming the Canadian’s downfall.

The perfect example of Negreanu’s bad luck arrived when ‘rUaBot’, on the button, raised and Kid Poker called. They then both checked the 6♣ 5♥ 2♠ flop, before ‘rUaBot’ check-called the 7♠ turn. The J♥ river saw Negreanu check, ‘rUaBot’ bet and the Canadian call. However, much to Negreanu’s consternation, ‘rUaBot’ revealed J♠ 3♥ for a pair of jacks as Kid Poker mucked his hole cards.

Negreanu could not contain himself, writing: That is starting to get really annoying LOL, as he noted how that river jack was characteristic of how their match had been playing out.

Canadian Won’t Give Up Easily

Then again, Negreanu is not one for giving up and by the time they were ready for a break – following hand 553 – the German’s lead had once again been cut back, this time to $29,700.

But ‘rUaBot’ extended his lead as he rivered several winning hands, including one in which the pair built up a massive pot on a board that read Q♠ 3♥ 6♦ 9♥. Negreanu had maintained aggression throughout the hand and continued by again betting on the 4♥ river – only for ‘rUaBot’ to raise.

A dumbfounded Negreanu typed really, but still made the call to see that ‘rUaBot’ had rivered a heart flush with his Q♥ 2♥.

Things got even worse for Kid Poker not long after that hand as ‘rUaBot’ amazingly rivered two pair while holding J♦ 3♣ to take down a $3,200 pot, with this latest disappointment for the Canadian seeing him type: No way… in a word, ‘creepy’.

‘rUaBot’ managed to increase his lead again, this time to $46,800 by hand 605, before things quietened down for a short while – although the online sensation pushed on again to be $52,900 up after 698 hands.

Negreanu was again undone by a river card as the day wore on – this time seeing a board of 10♠ 7♦ 8♦ 3♥ 5♥ provide ‘rUaBot’ with a straight from his 6♣ 4♠ hole cards. The Toronto native somehow managed to retain his sense of humour – if not his cash! – to write: “One day you need to teach me how to keep doing that lol.

The German player was closing in on success by the time he had $58,900 of Negreanu’s cash after 748 hands as river cards continued to favour ‘rUaBot’.

Negreanu’s slide to defeat continued unabated to see him down by $62,400 following the 810th hand, while the Canadian had just $5,500 left on Table One by the time hand 925 had been played out.

Hand 937 Brings Negreanu to His Knees

The 9♣ turn prompted another call from ‘rUaBot’ following a $400 bet from Negreanu. The 2♣ river saw Negreanu bet half of his stack, but eventually put it all into the middle when ‘rUaBot’ raised Negreanu.

While Negreanu is adamant he won’t play two tables of heads-up Limit Hold’em ever again, PokerStars are sure to announce details of the next match-up soon. Will the Canadian be involved? Maybe not. But we’ll just have to wait and see.