Daniel Negreanu is on a roll: after slamming the online poker regulars, ‘Kid Poker’ used his heavy artillery to defend his good friend Phil Ivey. 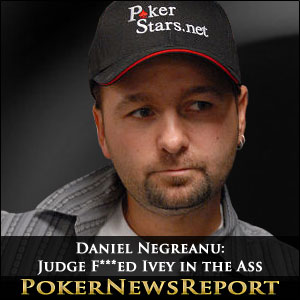 Daniel Negreanu is on a roll: after slamming the online poker regulars, ‘Kid Poker’ used his heavy artillery to defend his good friend Phil Ivey.

Daniel Negreanu is playing his hands agro (as in overly aggressive) lately. After going all-in against the online professional players in the Spin & Go battle last week, ‘Kid Poker’ went on another attack frenzy and unleashed his second barrel this time against the UK High Court.

In an interview for PokerListings, Negreanu spoke plainly and directly about what happened to his good old friend Phil Ivey in the famous edge-sorting case and used strong words like ludicrous, absurd, completely unfair, and wrong against the honorable judge. But that’s not all; he also said:

In every logical human being’s mind it’s an open-and-shut case but the judge f***ed him in the ass.

On October 8, 2014 , the UK High Court of Justice ruled that the American cheated when he won £7.7 million playing Punto Banco in London’s famous gambling club Crockfords, in August 2012. According to the Canadian, this sets a bad precedent for the high rollers who will think twice before gambling big in any of the British casinos.

‘Kid Poker’ explained that it is in fact the casinos that actually take advantage of people and manipulate them. What Ivey did was basically using the same weapons the casino have at their disposal on a daily basis. They should have paid Ivey like honorable people and then deal with the issue so it can never happen again.

Instead, Crockfords chose to retain the American’s profits and pay him only his initial stake. As a result, Ivey sued them and tried to prove in court that edge-sorting – reading the cards based on some asymmetrical patterns on the back – isn’t cheating. The judge however had a different opinion and wasn’t at all happy with the methods the American used in order to ‘cheat’. To succeed and take the house’s money, the ten-time WSOP bracelet winner specifically asked for a Chinese dealer who knew Mandarin and with the help of his Chinese friend, Cheung Yin Sun, he asked the dealer to do a number of things like use the same flawed decks of cards and rotate the favorable cards in the opposite direction to all the other ones to see when the patterns change.

The Crockfords’ representatives defended themselves using the ignorance card. They didn’t knew what was going on and thought that Ivey was just being superstitious. Negreanu however doesn’t buy into that and believes that Crockfords should be held responsible for their mistakes.

What’s the next step for Ivey now? Maybe trying to appeal. If it’s not a possibility, then the ‘Tiger Woods of Poker’ will have to move on. ‘Kid Poker’ said:

He’ll be fine. But I’ve talked to him and he’s not happy about it. He felt good about the case. I think if there’s an opportunity to appeal, he will appeal.