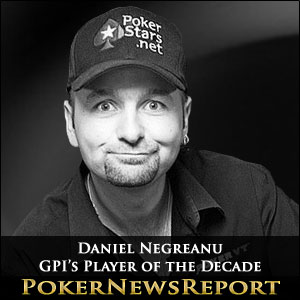 He might not be a kid anymore, but “Kid Poker” proved in 2013 that the game hasn’t passed him by. Since arriving on the scene in the late-1990s the long-time Team PokerStars Pro has watched the game evolve into the ultra-competitive sport it is today. Yet, despite facing stiffer and stiffer competition, Negreanu has continued to thrive, not because he’s necessarily that much better or analytical than today’s top pros, but because he possesses an uncanny feel for the game.

Given his remarkable 2013, it seems only fair that the 39-year old Canadian native would be awarded GPI’s “Player of the Decade” award.  The recognition is the last in a long line of awards won by Negreanu in 2013. He was also named the BLUFF Magazine Player of the Year, WSOP POV and Card Player’s Poker Player of the Year.

Negreanu currently sits atop the GPI ranking, a position he has held for the past 10 weeks. He maintains a nearly 130 point lead over second place Old Schemion. Rounding out the top 10 are some of the biggest names in professional poker including Marvin Rettenmaier, Philipp Gruissem, Shannor Shorr and Vanessa Selbst. 2010 Main Event Champion and fellow Canadian Jonathan Duhamel resides in ninth.

Upon learning that he had won, Daniel responded:

I’m very honored by this award. I’ve worked hard on my game throughout the decade, so that I could find ways to consistently win year in, year out against tougher and tougher competition each year.

He goes onto state that the key to his success is confidence, and that he begins 2014 more confident than ever.

Daniel has earned nearly $20 million from live poker tournaments, ranking him third on the all-time list. He briefly held the second spot, but Eric Seidel surpassed him when he won over $650k at the WPT Doyle Brunson High Roller event in December.

Unlike Antonio Esfandiari and Sam Trickett, who hold the number one and four spots respectively, Negreanu was not the beneficiary of a single bloated multi-million score. Instead, he has proven a model of consistency. Since becoming WSOP POV in 2004, he has placed in the money in tournament after tournament, but never for more than $1.77 million at one time: that came all the way back in 2004 when he won the WPT Championship.

Negreanu holds six WSOP bracelets, including an Asia-Pacific Main Event bracelet, but has yet to win the Vegas main – an accomplishment he hopes to achieve before he retires. Among Kid Poker’s other grandiose accomplishments in 2013 were a runner-up performance in the EPT Barcelona High Roller and a win at the WSOPE High Roller.

Eric Seidel, another legendary figure of poker, ranked second for Player of the Decade, with Michael “The Grinder” Mizrachi ranking third.