Team PokerStars Pro Daniel Negreanu has had it with anti-player tournament rules. 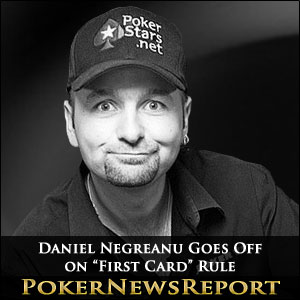 Team PokerStars Pro Daniel Negreanu has had it with anti-player tournament rules.

Daniel Negreanu is no stranger to controversy. The five time WSOP bracelet winner and celebrity face of the poker world has expressed his opinions about other poker players, tournament structures, and more recently about new tournament rules. These days, Negreanu is waging war against a newly implemented statute called the “first card off the deck” rule.

The rule states that if a player is not sitting at the table when the first card of a hand is dealt, that the player’s hand is automatically dead. While the rule has been enforced at PokerStars sponsored tournaments for the better part of two years, it did not become an official TDA Rule until quite recently.

Earlier this month, Daniel became the victim of the rule at a 10,000 Euro High Roller event. Daniel posted his small blind, got up from the table and stood behind his chair to talk with fellow poker pro Philipp Gruissem. He had his back to the table. By the time he turned back around, the dealer had already mucked his hand. That’s when Negreanu exploded.

After launching an unholy verbal assault on the tournament directors, Daniel angrily went all-in blind on the next hand. He was swiftly eliminated by Timothy Adams. Then, in true fashion, Negreanu turned to Twitter, recounting his unsavory experience. It wasn’t the first time Negreanu complained about the rule, and it certainly wouldn’t be the last.

In his latest video Rant, Negreanu, featuring a shockingly full head of hair, speaks candidly about his and the TDA’s differing opinions. The calmer Negreanu stated that the rule does not “positively impact” the tournament player experience, and that the “first card” rule, while not a big deal itself, could inspire a trend that would ultimately lead to a unpleasant, prison-like tournament atmosphere.

Negreanu also cites the “no talking” rule. While Daniel does see the importance of the rule, he doesn’t believe that players should be penalized for picking up their phone at a non-critical juncture, and telling the caller that they cannot speak at the moment.

Ultimately, what it comes down to is player freedom. Amateur players participate in tournaments less for the money and more for the thrill of competition. They do not need to be stymied by rules that remind them of their days as a junior high-school student. At the same time, players should be accountable for protecting their hand at all times.

However,  the odds of a player not being around when the first card is dealt and being present when the last card is dealt is so rare, that the rule almost seems irrelevant and shouldn’t really be the subject of much debate.

With that said, the fear that the “first card” rule could eventually lead to stricter rulings is very real, and for that reason the TDA should at least be mindful of player opinions.