Canadian superstar Daniel Negreanu is in contention to collect his fifth World Series of Poker (WSOP) bracelet after Day 2 of event #5 in Las Vegas. 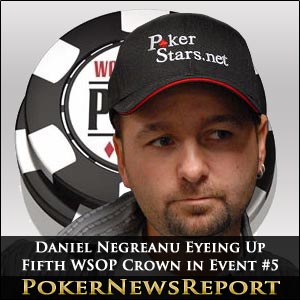 Canadian superstar Daniel Negreanu is in contention to collect his fifth World Series of Poker (WSOP) bracelet after Day 2 of event #5 in Las Vegas.

Just nine players made it from the 71 Day 1 survivors from an original field of 639 – who have created a prize pool of $862,650 – with New Hampshire’s Bryan Pellegrino leading the way in the Amazon Room on 790,000 chips.

Canadian Star Sure To Feel Confident

However, 37-year-old Negreanu will certainly be confident of overcoming that huge chip deficit later today to pick up the $189,818 top prize after coming close back in 2009, when losing to American Barry Shulman in their heads-up clash for the WSOP Europe £10,000 buy-in main event in London.

However, it won’t be easy as Toronto’s Negreanu will also be up against the likes of two-time World Poker Tour (WPT) champ Tommy Vedes, of Vegas, European Poker Tour (EPT) title-holder John Eames, of England, and another experienced Vegas pro in Jonathan Aguiar.

Day 2 started with Antonio Esfandiari as the chip leader, only for the Vegas-based pro to exit in 44th place for $4,011 as the field was cut back to just 22 survivors after six levels.

The nine-handed final table was set during the last two hands of the day, when American duo James Mackey exited in 11th and Thom Werthmann fell in 10th – both for $11,361.

Vegas’ Mackey crashed out when losing a hand to Aguiar. With the action having folded to button Mackey, he then raised it to 24,000, only for big blind Aguiar to re-raise. Mackey then shoved all-in and Aguiar made the call.

The cards were turned over to show that Aguiar was way out in front with his A♥ A♠, prompting a surprised and disappointed Mackey – with J♥ J♠ – to say: Are you kidding me? The board of 4♠ 5♥ 10♦ 2♣ 5♣ gave Mackey no assistance and he was gone, to be quickly followed out by Michigan’s Werthmann.

Having seen his stack demolished by Pellegrino just a few hands earlier, big blind Werthmann shoved all-in on what was the last hand of the night. Negreanu then popped in for a raise and Aguiar called. Negreanu and Aguiar were now in a side pot, while Werthmann’s tournament life was at risk.

Aguiar and Negreanu checked down the Q♦ 3♦ 5♠ 9♦ 4♣ board, with the former showing K♦ J♣ for king high that beat Negreanu. Werthmann took his time revealing his cards – placing the 7♣ down first, followed by the 8♠. Of course, the eight-high wasn’t good enough and Werthmann was sent to the rail.

Railbirds can expect a fierce fight for the title, given the experience and talent of the final nine, so expect some thrills and spills later today.

Meanwhile, Florida’s Barry Wiedemann was the last of 72 players to be paid when he picked up $2,432 just after the money bubble burst on Day 1.