Following some good-natured ribbing between Gus Hansen and Daniel Negreanu, KidPoker has challenged the Full Tilt pro team to a heads-up match. 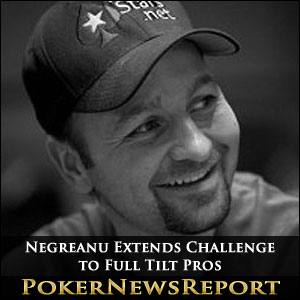 Following some good-natured ribbing between Gus Hansen and Daniel Negreanu, KidPoker has challenged the Full Tilt pro team to a heads-up match.

The exchange began when Hansen reminded Negreanu via Twitter last week about a hand played in 2006 on High Stakes Poker. Hansen hit quads on the turn to beat Negreanu’s full house and took down a pot of $575,000 ([1] you can watch it in the first video below). Wonder if I ever get another chance to take your money, Hansen tweeted. Come play me on Full Tilt Poker for a [High Stakes Poker] rematch.

Negreanu responded with a jab of his own. He told the Dane that he was planning on congratulating him on his successful start to 2013, but realized he was looking at Hansen’s graph upside down. Hansen has lost almost $800,000 this year, which followed a disastrous end to 2012 that saw the Full Tilt pro lose over $3.2 million at the relaunched site, according to highstakesdb.

KidPoker then released a video on YouTube ([2] video below), challenging Hansen to a Team PokerStars vs. Team Full Tilt match. Negreanu will select two PokerStars pros to square off against Hansen and fellow Full Tilt pros Tom Dwan and Viktor Blom. Hansen readily accepted the challenge without asking his teammates, saying, I have this funny feeling they will make time for this.

The competition will take place during the European Poker Tour in London next month. It will feature three heads-up matches, with the team winning two of three declared the champion. Negreanu’s video asks fans to get involved by recommending the two PokerStars pros he should select to join him in the challenge. KidPoker has whittled the choices down to Vanessa Selbst, Ike Haxton, Bertrand “ElkY” Grospellier, Jason Mercier and Eugene Katchalov.

Since you have tons of [PokerStars] pros to choose from, and I have my two, I should get to pick the match ups, Hansen suggested. Negreanu agreed.

A Team PokerStars vs. Team Full Tilt heads-up match will undoubtedly add excitement to the EPT London. The challenge will most likely be on Full Tilt Poker. Still to be worked out are the stakes involved, as well as the exact date of the matchup.

Full Tilt and PokerStars had an intense rivalry prior to Black Friday that centered around signing up new players, as well as competing for pro sponsorships. Some of the luster of that rivalry may be gone since the two are now sister sites under the ownership of the Rational Group. However, the competitive spirit remains. The heads-up challenge should be an interesting and exciting event.