Day 4 of the European Poker Tour stop in Vienna has come to a conclusion and has a star headlining the final table – PokerStars’ very own Daniel ‘Kid Poker’ Negreanu. Yesterday Negreanu finished the day second in chips… 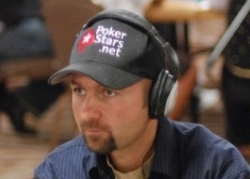 Day 4 of the PokerStars European Poker Tour stop in Vienna has come to a conclusion and has a star headlining the final table – PokerStars’ very own Daniel ‘Kid Poker’ Negreanu. Yesterday Negreanu finished the day second in chips to Konstantinos Nanos however today he has played fantastically and will enter tomorrow’s final table with a big chip lead and the expectation from many poker players is for him to take down the win.

If Negreanu does manage to win the event it will be a very memorable day for him. Not only will he pick up the first-place prize of €700,000 but he will leapfrog rival Phil Ivey on the all-time live poker tournament money list, and will also become a Triple Crown winner (a player who has won an EPT, WPT and WSOP title) joining Gavin Griffin and Roland de Wolfe in that elite club.

Of course, he won’t have it easy at the final table despite having a dominant chip lead of just over 5million. Konstantinos Nanos who finished yesterday ahead of him as chip leader has around 3.6million chips with Andreas Wiese entering the final table with the least chips – holding a stack of 730,000.

It was an action packed day which saw PokerStars online qualifier Fabrizio Gonzalez being the first player to be eliminated of the day. U.K poker legend Surinder Sunar was eliminated in 19th place after beginning the day with the second least chips and newly announced Team PokerStars Pro Toni Judet was eliminated in 16th place.

Daniel Negreanu isn’t the only Team PokerStars Pro who will be present at the final table however as he will be joined by Martin Hrugby who enters the final table with the second smallest stack, holding 975,000 chips. Also making the final table is three PokerStars online qualifiers – Konstantinos Nanos, Michael Eiler and Matthias Lotze.