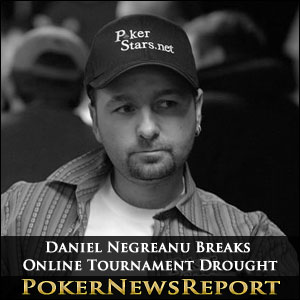 He might not be a kid anymore, but young online pros would be unwise to underestimate Daniel Negreanu’s ability on the virtual felt. After countless tries, the 38-year-old finally took down a major online tournament: the PokerStars SCOOP Event #39 – Pot Limit Omaha. Negreanu’s first place finish was good for $216,000, but to Kid Poker the real prize was winning his first SCOOP watch.

The event featured a hefty $5,200 buy-in which kept the playing field small. But even with only 180 entrants, the prize pool exceeded the 400k amount guaranteed by PokerStars by a staggering half-a-million dollars. Negreanu defeated 29-year-old German tournament specialist and high stakes PLO player Florian Langmann “FA_Morgoth” for the title. Langmann was rewarded with $148,950 for his 2nd place efforts.

2013 is shaping up to be the year of the Negreanu. After winning his 5th WSOP bracelet in April at the inaugural WSOP Asia Pacific Main Event, and placing 4th in the EPT Main Event earlier this month, Daniel has already accumulated over $1.7 million dollars in tournament winnings, bringing his live tournament career total to an impressive $17.8 million. Negreanu currently resides as the 15th ranked poker player in the world, according to the GPI Top 300. Not bad for someone who in the poker world is considered over the hill.

Daniel’s next stop is Las Vegas, where he will undoubtedly be playing in this year’s upcoming 2013 WSOP. Notorious for playing a wide variety of events, 2013 stands to be no different for the superstar, as he looks to solidify his status among the Poker Gods with his 2nd WSOP Main Event win this year.

In other related news, Ben “Ben86” Tollerene won SCOOP Event #40. Featuring a massive $21,300 buy-in the event was one of the priciest heads-up tournaments in online history. Tollerene’s win was good for $200, 401.