The popular online poker forum TwoPlusTwo is again coming under fire by Daniel Negreanu for its policy regarding what can or cannot be posted on its site. 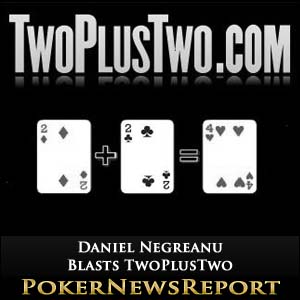 The popular online poker forum TwoPlusTwo is again coming under fire by Daniel Negreanu for its policy regarding what can or cannot be posted on its site.

The latest incident in which KidPoker told site moderators to stop being such nits occured when a planned 50-plus hour poker podcast designed as a charitable event to benefit the 22Q.org Foundation attempted to post details of its fund-raising drive on the TwoPlusTwo forum. The post was deleted by site moderator ProfessionalPoker who told a 22Q spokesman that charity spamming is not allowed on the site without approval from site owner Mason Malmuth, according to examiner.com.

TwoPlusTwo has allowed posts of links to podcasts in the past and the latest fracas has many poker players bewildered over what is or is not allowed by way of postings. Negreanu had a run-in with the same moderator in March when he attempted to post his weekly rant but his post was removed because the video included an advertisement for iSeriesLive. Negreanu received a one-day ban from posting on the popular online poker forum when a second attempt was again deleted by ProfessionalPoker.

This time around, the charitable event has the support of many poker players who are running an Ironman Podcast beginning at midnight on September 3 in an effort to raise money and promote awareness of children afflicted with 22Q.11 deletion syndrome. Have a heart. It’s for charity, Negreanu posted at Full Contact Poker in response to TwoPlusTwo disallowing the post on its site. KidPoker went on to say that Mason Malmuth and that kook moderator are greasy, slimy, nerdy, nutcases and they make me sick.

VegasPokerRadio.com is running the podcast and is attempting to set the world record for longest podcast using the same hosts. Well-known poker pros and celebrities have been invited as guests on the show. The 22q11.2 deletion syndrome gets its name due to a small piece of chromosome 22 becoming deleted at an area known as q11.2 and can cause a myriad of health problems including heart defects, palate defects, and immune system disorders.

TwoPlusTwo has long had a policy of not supporting charities likely due to past attempts of scammers promoting fake charities. However, about one year ago, a moderator resigned from his duties at the site when Presidential Candidate Gary Johnson was permitted to ask for donations at TwoPlusTwo–an apparent double-standard to the site’s policy.