Daniel Negreanu seems to be journeying along a path to ostracism by the poker community following another thinly veiled attack on Annie Duke, Epic Poker League. 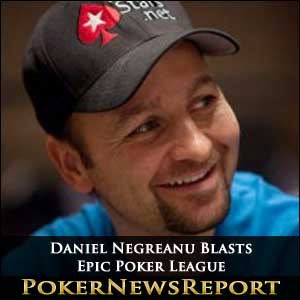 Daniel Negreanu, once the world´s most popular poker player, seems to be journeying along a path to ostracism by the poker community following another thinly veiled attack on Annie Duke.

Having used extreme profanities last year to describe his feelings about one of the world´s leading female poker players, Negreanu´s latest rant concerned the Epic Poker League (EPL) and why he chose not to participate in the recently concluded inaugural event. Annie Duke is, of course, commissioner of Federated Sports and Gaming and the public face of the Epic Poker League.

Writing in his blog, Negreanu claimed that “based on my intimate knowledge of how these types of things work” the Epic Poker League was doomed to failure and would not bring in enough revenue to survive. He stated that he chose not to compete in the EPL for a “laundry list” of reasons including that the public (his public?) would not be interested in it and that it had a “bizarre name”. Furthermore, Negreanu wrote that the public wanted “Cinderella” stories at the final table and not a feature table full of online pros that had never been heard of outside of the 2+2 forum.

Sadly, Negreanu seems to be losing the plot on this one. Primarily, the EPL hosts games of added prize money poker, with a buy-in well within Negreanu´s bankroll that offers the potential of a $1 million pay-day – as just achieved by Chino Rheem. Players who competed in the inaugural event included Phil Hellmuth, Chris Moorman, Sam Trickett, Michael Mizrachi, Ben Lamb and Jason Mercier – barely players on the verge of obscurity  – and satellite tournaments running at the Palms Casino enabled players such as Cliff Waite to win his seat in the event for just $180.00.

Daniel Negreanu could have used any number of justifiable excuses to explain his non-participation in the EPL – a conflict of interest with his PokerStars sponsorship, the fact that he could not commit himself to participation in a full season, or a clash of dates with other events he wanted to get involved in. Indeed, the next three EPL events coincide with the WCOOP, the Five Diamond WPT Classic and the L.A. Poker Classic – events in which Negreanu has been successful in the past. However, a quick look at his current form shows that Negreanu only has one major victory in an open tournament since he won the British Columbia Poker Championship in 2008 – and that was a side-event at EPT Vilamoura last September!

Or is it All About the Money?

Negreanu concludes his oratory with a warning to players that the lack of substantial television coverage will mean that they will simply never make any endorsement money from the Epic Poker League. Is it his “intimate knowledge of how these types of things work” that has drawn him to this conclusion, or wouldn´t anybody pay him to take part? With a recent record of under-achievement like his, maybe he couldn´t afford the air-fare!