Daniel Negreanu kicked off the New Year by making a list of goals he would like to accomplish on the poker tables in 2012 and his most desirable are to cash at least $1 million in tournament winnings and to regain the top spot on poker’s All-Time Money List. 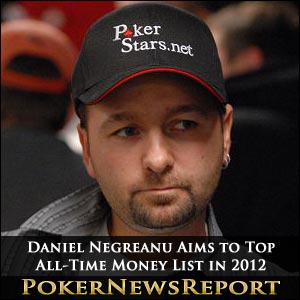 Daniel Negreanu kicked off the New Year by making a list of goals he would like to accomplish on the poker tables in 2012 and his most desirable are to cash at least $1 million in tournament winnings and to regain the top spot on poker’s All-Time Money List.

The Canadian pro has been establishing his goals at the start of every year for the last few years and already has a good shot at the $1 million in tournament cashes for this year, as he finished in 5th place just a few days ago in the $100,000 PokerStars Caribbean Adventure (PCA) Super High Roller Event for $250,900. The PCA buy-in was a lofty $100,000, which saw 30 players pony up the entry fee, with two additional re-buys.

Speaking of huge buy-ins, Negreanu has already committed to playing in the massive $1 million buy-in BIG ONE for ONE DROP, which is scheduled to run from July 1-3, 2012, at the Rio All-Suite Hotel and Casino in Las Vegas, in tandem with the 2012 World Series of Poker (WSOP). Add another $100,00 in buy-ins at the Aussie Millions and Negreanu estimates that he “could spend as much as $2 million in buy-ins this year.”

That’s a lot of cash to lay out in entry fees. As such, the 37-year-old said that he may be selling part of his action in particular events, such as the BIG ONE for ONE DROP.

“I’m not planning on putting the whole million up for the One Drop event and am looking to sell probably $600,000 worth of pieces,” Negreanu said. “I am considering doing it via twitter and Full Contact Poker, allowing people to buy a piece of me for as little as $120! If that happens, I’ll obviously post details.”

His goal of being numero uno on poker’s All-Time Money List is certainly attainable, as Negreanu held the spot in January of last year, taking over the reign from Phil Ivey, the leader at the time, after a 2nd place finish at the 2011 PCA Super High Roller event. But two months later, Eric Seidel ousted Negreanu from the top spot by winning the National Heads-Up Poker Championship for $750,000. Seidel continued having a stellar year, pocketing $6,530,153 in winnings to advance his career total earnings to $16,885,167, putting Negreanu in 2nd place at $14,901,459.

Negreanu’s other listed goals for this year include winning a WSOP bracelet. In previous years, he had set goals of winning two bracelets for the year, but since he hasn’t won a gold bracelet since 2008, he has adjusted that particular goal. Negreanu also has resolved to “have a better year than Jason Mercier,” who he considers to be the model of consistency.

“There is no one in poker today that reminds me more of myself when I was 25 than Jason,” Negreanu blogged. “He is a winner at poker and life. His consistent success has motivated me to get back on top of the game I love.”

The complete list of Negreanu’s goals for 2012 can be here at fullcontactpoker.com. Good luck Daniel!