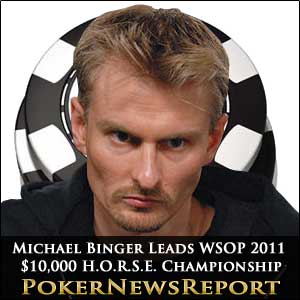 Home town favourite Michael Binger sits atop the chips leaderboard on 742,000 following another 10 levels of play in the $10,000 H.O.R.S.E. Championship at the World Series of Poker (WSOP) of 2011 in Las Vegas yesterday.

The Vegas pro did, however, court controversy in one particular hand on day two at the Rio All-Suite Hotel & Casino when, following Canadian superstar Daniel Negreanu’s accusation of him cheating, tournament director Robbie Thompson became involved to find a solution to the argument.

Negreanu, although not involved in the hand that lasted almost 10 minutes, accused Binger of an angle shoot, with the debate being whether a specific player should be compelled to make a raise.

An upset Binger would eventually fold on the turn to be left with only a few big bets, although he did regain his composure with some style to end the day as chip leader.

But it was an unsavoury incident all the same. The action began with a 6,000 pre-flop raise, only for Binger to three-bet to 9,000. The blinds folded and the original raiser then called, before checking a Kd-6d-8c flop. Binger then made a 1,500 bet, only to see his opponent raise that to 3,000.

This is when Negreanu got involved because, with the limits set at 3,000 and 6,000, Binger’s bet was just half of what the rules state.

So, with Binger’s opponent placing what appeared to be a raise, Thompson was summoned to make a decision on how the hand should proceed.

But, as they awaited Thomson’s arrival, Binger and Negreanu started a heated debate over the correct procedure, with the latter arguing that the check-raiser’s obvious intention was to raise and therefore ought to be made to put 6,000 in the pot after Binger added another 1,500 to his bet.

However, Binger was not impressed by Negreanu’s involvement and shouted that he should shut his “God-damn mouth!” because he reckoned his tournament life was “on the line”.

But four-time WSOP bracelet winner Negreanu was adamant that Binger had indulged in an angle shoot with his half-bet to find out exactly what his opponent’s intentions were.

The scene calmed down somewhat with the arrival of Thompson, who ruled that Binger’s half-bet should be upped to a full bet and his opponent’s raise be considered a call.

However, Binger was still flustered and turned to Negreanu to say that he had to “throw a God-damn scene!”

The dealer then produced a turn card of the 5c for Binger’s actual hand opponent to bet 6,000. Binger, with only 18,000 chips left, sat quietly for more than four minutes as he considered his next move.

He then turned to Thompson to ask what would “happen when the hand is over”, before adding that he didn’t want to “take a penalty and blind out” because that could “change the whole hand”.

However, Thompson told him that “there will be no penalty – just a warning” after the hand’s completion, resulting in Binger folding following another 60 seconds of deliberation.

Thompson left the table soon after, but not before he had asked: “Are we good here?”, which garnered a brilliant response from another player at the table, when he said that the tournament director should “just throw them out to be safe!”.

Incredibly, the very next hand of hold’em saw Binger double through on the Canadian.

Binger, in the cut-off, opened to 6,000, only for Negreanu – on the button – to three-bet to 9,000. Binger called that and then check-raised a Kh-4d-2d flop. Negreanu, in response, made the call as the 6c arrived on the turn. Binger put his final 6,000 chips in and Negreanu called.

Binger showed 2c-2s, while Negreanu held As-Jd. The river showed the 7s to allow Binger to double through to 45,000 chips as Negreanu dropped back to about 35,000.

However, other bracelet holders remain, including Max Pescatori, John Monnette and Chau Giang, while skilled mixed game pros Tom Dwan, Yuval Bronshtein, Brett Richey are also all still in with a shot at WSOP glory.

Ukrainian-born American Eugene Katchalov was the unfortunate bubble boy as he was eliminated in 25th place, while Los Angeles pro Daniel Alaei ($21,905) just made the money it in 24th.