Daniel Negreanu – “Lederer is an Idiot”

Daniel Negreanu has spoken out about the Full Tilt Poker situation, claiming that Ray Bitar and Howard Lederer acted like “buffoons and arrogant idiots” for failing to hire people to run their company the “proper way”. 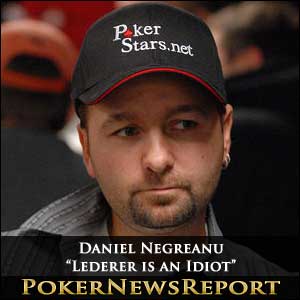 Daniel Negreanu has spoken out about the Full Tilt Poker situation, claiming that Ray Bitar and Howard Lederer acted like “buffoons and arrogant idiots” for failing to hire people to run their company the “proper way”.

He also stated in a video posted on YouTube that the two directors of Full Tilt Poker totally screwed the online poker players and totally deserved all the venom they are receiving on poker forums and social media sites plus about a thousand times worse.

Negreanu´s statement will not help dissipate the long running feud between himself and Howard Lederer – who has been upset for many years over the criticism that Negreanu has piled on both him and his sister, Annie Duke. In August, Negreanu launched a thinly veiled attack on Annie Duke and in the past Lederer has had to fight his sister´s corner against the Canadian poker star. Considering the current situation the director of Full Tilt Poker finds himself in, Negreanu has also chosen a time to make his accusations when there is no chance that Lederer will be able to retaliate.

American Players Should Go To Russia

Negreanu also used the opportunity to comment on the current ban on American online poker players, calling it beyond absurd that – in what is supposedly a free country – players could go to Russia if they wanted to play online poker in their underpants, but were banned from playing in their own homes. As one of the highest profile players on [geolink href=”https://www.pokernewsreport.com/pokerstars”]PokerStars[/geolink], Negreanu had to re-locate to Canada to compete in their World Championship of Online Poker (WCOOP) where he cashed in fifteen of the sixty-two tournaments – grossing a cool $119,193.

Negreanu also stated that he did not expect to see [geolink href=”https://www.pokernewsreport.com/us-poker-sites”]online poker in the US[/geolink] legalised within the next year. He felt that Governments don´t get things done the way they should and said that he was adopting a wait and see approach. Speculating that it might be many more years before the market is opened up again for competition from the States, Negreanu is currently in London competing in the European Poker Tour before heading off to Cannes for the World Series of Poker Europe Main Event and Caesars Cup Challenge.