Twenty-one year old Daniel Marks took down the DTD September Deepstack for £36,000 after recovering from having just one big blind earlier in the day. 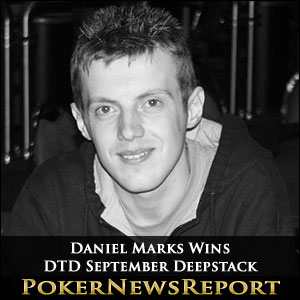 Twenty-one year old Daniel Marks took down the DTD September Deepstack for £36,000 after recovering from having just one big blind earlier in the day.

Daniel Marks has already made a name for himself on the online poker circuit playing under the pseudonym of “ummg” and winning more than $80,000 on PokerStars. On Monday he collected his first live poker five-figure score with victory in the DTD September Deepstack.

The guarantee was ultimately smashed as 568 players qualified online (or played the online Day 1A), bought in at the venue or re-entered to increase the value of their chip stacks – creating a £170,400 prize pool which was shared between the top 72 players.

Plenty of Famous Names at the Games

Stars of the UK poker scene that turned up to support the event included Sam Trickett, GukPT winner Albert Sapiano, and Genting Poker´s Yucel ‘Mad Turk’ Eminoglu. All three cashed in the event – indeed Sapiano was the winner of the hand that saw the bubble burst on Sunday afternoon – but much of the attention surrounded Marks´ incredible comeback after he was reduced to one big blind after losing an A♥ A♠ > K♣ K♥ confrontation against Jim Lody in a 2.5 million chip pot.

Daniel Marks´ hot run continued, and his A♦ K♣ caught the A♠ on the flop to send John Sadler (J♦ J♣) to the cashier´s desk in eighteenth before his K♦ 10♣ connected the flopped K♣ to eliminate Anthony Martin in fourteenth (A♦ 3♦). Finally he bust out both Karl Snow (A-Q) and Athir Ali (9-9) in the last hand of Sunday night with pocket Kings to set up the final table.

When play resumed on Monday for the Final Table of the DTD September Deepstack, blinds were 4,000/8,000 with a 1,000 chip ante. Dan Marks´ run of good fortune continued when he flopped the J♦ to eliminated Tom Hall in eighth J♣ J♠ > Q♦ Q♣, and Vik Mehta won a three-way pot with Ace-high to signal the demise of Alfie Adams in seventh.

James “Raggy” Clarke started his climb towards the top of the leaderboard when busting Stephen Ayres out in sixth A♥ Q♠ > 6♦ 6♠, and maintained his momentum when scoring an elimination with a set Jacks against over Andy Tuxworth´s pocket sevens to send Tuxworth to the rail in fifth.

Latif Patel had come to the final table shortest stacked of the eight remaining players, but made an important impact on the dynamics of the final table with several stack-busting double-ups. An early double up with trip Jacks against Alfie Adams sent him on his way, and another double with AK > 77 against Daniel Marks nudged him to over one million chips.

A rivered flush against Alfie Adams crippled Adams just before his elimination in seventh (above), and at one point he had chipped up to 2.7 million chips from his starting stack of 200,000 and was seriously in contention for a shot at first place. However, he then doubled up Vik Mehta K♠ 10♣ > Q♦ J♦ and bust in fourth when taking a chance with K♠ Q♣ and failing to improve passed Daniel Marks´ J♦ J♠.

Marks Takes on Clarke in Heads-Up

James Clarke´s elimination of Vik Mehta in third (A♠ Q♠ > Q♥ 10♦) set up a nicely balanced climax to the DTD September Deepstack event with both Daniel Marks and Clarke hovering around 8.7 million chips. However, there was no gentle posturing when the heads-up got underway, with almost every hand going to showdown.

Dan Marks won the first big encounter between the two when pairing his K♦ on the flop to relieve Clarke of 3 million chips, but Clarke doubled back the very next hand when his J♥ paired on the flop to beat Marks´ A♦ K♣.

Marks was back ahead almost immediately when flopping a straight to best Clarke´s two pairs and the title was sewn up in the next hand, when Clarke A♥ 4♥ called Marks´ shove with A♣ 8♣ and failed to find the hearts he needed in order to avoid defeat.