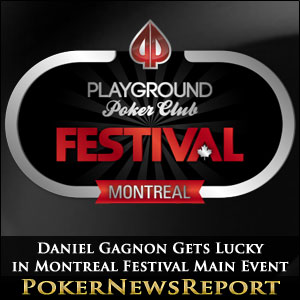 Daniel Gagnon will wake up this morning $190,750 richer after winning the $1 million guaranteed Playground Poker Montreal Festival Main Event and probably wonder how on earth he managed it! The Quebec native overcame a field of 1,063 players to take down the first prize after a sensational final table, during which he three times came from behind in all-in encounters after getting involved in the pot with the worst hand.

Even more remarkable is that David Gagnon used up his “One Time” on several occasions during the penultimate day of the Montreal Poker Festival Main Event – not least when cracking Gabriel Veniza´s pocket Aces with a flopped set of Threes to take the chip lead. Consequently, when the final nine players took their seats at the Playground Poker Club yesterday – with blinds of 50,000/100,000 (ante 10,000) – Gagnon had a significant advantage over the rest of the field.

Despite half the players at the final table having relatively small chip stacks, the early action at the final table was pedantic. Short stack Daniel Gagne managed a double up when his pocket Deuces flopped a set against Noeung Troeung´s pair of Nines, but then Troeung took a massive slice of Lorne Wechsler´s chip stack – Weschler being the first player to leave the table just before the first break of the day.

When the players returned from their break (Level 32 – blinds now 75,000/150,000 – ante 25,000), the pace of eliminations accelerated. Alexandre Lavigne was bust in eighth place when his A♦ 3♥ missed a gutshot draw to fall to John Helou´s flopped set of Sevens, and Lavigne was quickly joined at the rail by Daniel Gagne – who was looking good to double up with K♣ J♣ on the flop of Q♣ 9♦ 6♣, but whose hand failed to make sufficient improvement to beat Yannick Lamarre-Delooz´s K♦ K♠.

Daniel Gagnon´s good fortune hit top gear as the table was reduced to six players. He bust Michael Mellor in sixth place when flopping two pairs to bust Mellor A♦ 7♠ > A♥ K♣, and then rivered an Ace-high flush to eliminate John Helou in fourth place A♠ Q♠ > 9♥ 9♠. Noeung Troeung maintained his second spot by sending Yannick Lamarre-Delooz to the rail in fourth place A♣ 10♣ > K♠ Q♠, but Gagnon had not yet finished benefitting from fortunate River cards.

Thi Nguyen had played well throughout the final table and – as the last lady standing – she had a significant amount of support on the rail. Nguyen resisted the temptation to shove her stack forward until deep into Level 35 (blinds now 150,000/300,000 – ante 50,000), and when she did, she looked a strong favourite to double up with A♥ 8♥ > Daniel Gagnon´s A♦ 6♦. The flop and Turn of 10♠ 3♠ Q♣ / Q♦ gave Gagnon only a 7% chance of winning the hand, but the 6♣ spiked on the River to send Nguyen out of the tournament in third place.

With a chip advantage of 25,200,000 -v- 6,675,000 over Noeung Troeung, it did not take long for Daniel Gagnon to wrap up the Montreal Poker Festival Main Event. In the final hand, Noeung Troeung moved all-in from the Small Blind with K♦ J♠ and Daniel Gagnon made the call with A♦ 9♠. The flop of A♦ J♥ 6♦ paired both players´ hands, but Troeung could not find a third Jack or second King to best Gagnon´s top pair, and he was bust in second place.