Daniel Gagne shot into the lead of the Canadian Spring WPT National on Day 3 with a string of early eliminations and patient play as the final table approached. 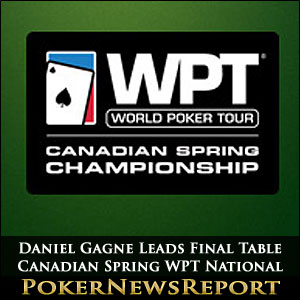 Daniel Gagne shot into the lead of the Canadian Spring WPT National on Day 3 with a string of early eliminations and patient play as the final table approached.

It was a long Day 3 of the partypoker.net Canadian Spring WPT National as thirty-nine players returned to the Playground Poker Club in Montreal aiming for a seat at the six-handed final table and a chance of winning the CAD$160,999 first prize.

All thirty-nine players were assured of a CAD $4,709 min-cash after the 126-player bubble had burst on Day 2, and yesterday´s action started briskly as short-stacked players attempted to improve their positions and step up the money ladder.

The chip leader at the start of play was Mario Lim with 1,758,000 chips. He was closely pursued by Eric Afriat (1,700,000 chips) and two-time WPT Montreal final table finisher Sylvain Siebert (1,655,000 chips). Lim managed to survive the day and earn a seat at the final table, but both Afriat and Siebert doubled-up short-stack players early on in the proceedings, were short-stacked themselves thereafter and were busted out in twentieth and eighth places respectively.

Lim had a comparatively quiet day compared to all the action that was going on around him. He eliminated Marc Guerbilsky in twenty-third place K♠ K♦ > 2♦ 2♥ before being unlucky to double up Rodney Lawrence 9♦ 9♣ > A♦ K♣ after pairing his Ace on the flop, but seeing Lawrence make a set on the Turn. Lim recovered, and busted Maxime Theroux in sixteenth place (J♦ J♠ > A♦ K♥) to finish the day in third place with 5,450,000 chips.

Meanwhile Daniel Gagne – who had started the day with just 648,000 chips was enjoying a really hot streak. Gagne (A♦ 10♠) hit trip Aces to bust out Gaetano Buda (4♠ 4♥) in twenty-eighth place, took a million chips from Marco Caza with a hero call against a missed straight bluff, eliminated Alexandre Lavigne in twenty-first (8♦ 8♠ > A♣ 10♦) and sent Osman Soubra to the rail in nineteenth place A♦ 8♦ > K♠ J♥.

As the tournament was reduced to two tables, Daniel Gagne´s hot streak continued. He bust Frederic Bunchan in fourteenth place (10♣ 8♥ > 9♠ 6♣) and took a 2.27 million chip pot from Johnny Mazzaferro (A♣ J♣ > 10♥ 10♠) – enabling Gagne to take a chip stack of 6 million chips to the ten-handed “unofficial” final table – which was increased to 8 million chips not long after when he bust Marco Caza out in tenth place A♣ K♣ > A♠ Q♥.

Comtois, Johnny Mazzaferro and John Paul Tabago are the three players who will complete the final table line up for the climax of the partypoker.net Canadian Spring WPT National – Tabago needing a miracle to get competitive as, when the tournament resumes at the Playground Poker Club in Montreal later today, the players will be deep into level 32 with blinds of 75,000/150,000 and a 25,000 chip ante.