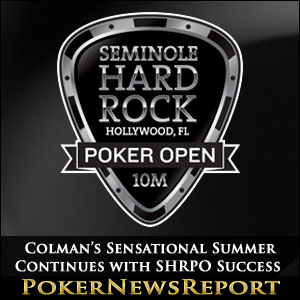 It has been a pretty incredible six months for Daniel Colman. Prior to April, Colman had only one six-figure score on his Hendon Mob database. Then he won the EPT Monte Carlo Super High Rollers for $2.1 million, outlasted Daniel Negreanu to take down the “Big One for One Drop” at the 2014 WSOP for $15.4 million, and followed that up with a second place finish against Olivier Busquet in the EPT Barcelona Super High Rollers for another $1.1 million.

For the past five days, Daniel Colman has been there or thereabouts at the top of the Seminole Hard Rock Poker Open leaderboard; and, on Day 5, had a titanic battle with Mike Leah for the chip lead – busting out three players with pocket Sevens. Leah ultimately won the contest to take the overnight advantage to the SHRPO final table when eliminating Blake Bohn in seventh place; but Colman was not that far behind him when the six players took their seats at the Seminole Hard Rock Casino final table.

The early action was dominated by short-stacked players doubling up against each other. John Dolan spiked the 9♣ to double up against Mike Leah 9♠ 9♥ > A♥ Q♥ after Leah had taken the lead in the hand on the flop of Q♠ 10♥ 2♣. Shawn Cunix beat Daniel Colman at his own “pocket Sevens game” when turning a set of Sevens to double up 7♥ 7♦ > K♠ 6♦, and Joe Kuether then doubled up against Shawn Cunix K♣ K♠ > Q♣ Q♠ to give him a little breathing space.

With all the doubling up going on around him, Martin Hanowski was reduced to being the shortest stacked player, and his participation in the Seminole Hard Rock Poker Open came to an end when he moved all-in for his last 2½ million chips. John Dolan made the call, and Hanowski tabled K♦ Q♦; but the German player failed to connect with the board to overcome Dolan´s J♠ J♦ and Martin Hanowski was eliminated in sixth place.

Colman Takes Next Three Players Out to Lead into Heads-Up

Daniel Colman and Mike Leah had both suffered setbacks to their chip stacks during the early encounters of the final table, and Daniel Colman was the first to make amends – busting Joe Kuether in fifth place A♦ A♥ > J♦ 9♦ after Kuether had moved all-in on the flop of J♣ 5♣ 3♥. Colman then took 50% of the chips in play when rivering a six-high straight to bust John Dolan in fourth place 6♦ 5♣ > J♥ 8♥, but Mike Leah doubled back into the chip lead A♣ 4♣ > Q♥ 3♥ when rivering an Eight-high straight.

Only Shawn Cunix stood between Colman and Leah continuing their battle into the heads-up, and Cunix was bust in third place by Daniel Colman when Colman (A♠ 10♣) flopped two pairs and Cunix (K♠ 7♠) could not find the cards he needed to complete a gutshot straight draw. With the elimination of Shawn Cunix, Daniel Colman took a 25,450,000 -v- 19,550,000 chip advantage into the heads-up against Mike Leah.

Kings Seal the Deal for Colman

The heads-up between Daniel Colman and Mike Leah was one-way traffic, with Mike Leah unable to dominate as he had on Day 5 of the Seminole Hard Rock Poker Open. Colman increased his advantage in a hand in which his 9♥ 5♥ improved to trip Fives on the Flop and to a Full House on the River, and thereafter the heads-up of the Seminole Championship event was quickly over.

In the final hand, Mike Leah opened for 600,000 chips from the button. Daniel Colman responded by three-betting to 1.5 million chips and Leah announced he was all-in. Colman snap-called and the cards were on their backs:

The hand was still anybody´s to win after the flop of 4♥ 3♥ 2♣ and Turn of 10♦, but the K♣ paired Colman´s hand on the River and sealed his victory and fourth seven-figure score of 2014.