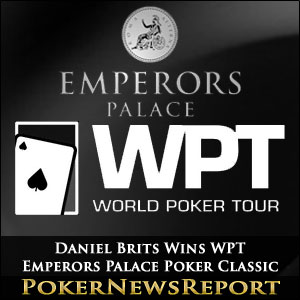 The final table of the WPT Emperors Palace Poker Classic Main Event promised to be a fascinating conclusion to the five days of action witnessed so far in South Africa, and we were not to be disappointed.

Going into the final table, Eugene du Plessis had built a commanding lead over his five opponents after crippling former chip lead Matt Lawrence in a monster hand on Day 3, but he was being pursued by Daniel Brits – who had recovered from being down to a handful of blinds on the penultimate day to be second on the leaderboard – and Dominik Nitsche, who won this event last year.

Ronit Chamani´s dreams of becoming the first woman to win an open WPT Main Event were squashed within a few hands of the WPT Emperors Palace final table. Chamani had already shoved twice without getting any takers, but decided to call Rob Fenner´s all-in bet and then Wesley Wiegand also moved all-in over the top to create a massive pot between all three short stacks.

With less than three Big Blinds remaining, Wesley Wiegand wasted no time in getting the last of his chips in, and was bust in fifth when Daniel Brits A♦ K♠ paired his Ace on the flop. Rob Fenner also made inroads on Eugene du Plessis´ chip lead when doubling up against Dominik Nitsche in another sensational hand in which Nitsche (10♦ 9♥) had flopped trip Tens, but Fenner (2♥ 2♦) had flopped a Full House.

Dominik Nitsche (A♦ J♦) looked like he was going to double back up immediately against Daniel Brits (A♠ Q♦) in the very next hand after he had paired his Jack on the flop of K♦ J♣ 8♣; but the 10♣ on the Turn gave Brits a Broadway straight and, with no Queen on the River to chop the pot, the former champion was eliminated from the WPT Emperors Palace Poker Classic in fourth spot.

An intriguing battle developed as the game went three-handed in Level 26 (blinds 20,000/40,000 – ante 5,000) as Daniel Brits moved into the chip lead after rivering a pair of Kings against Rob Fenner, and then Fenner doubled up against Eugene du Plessis (pocket Aces > pocket Threes) to relegate the former chip leader to the position of short-stack. Du Plessis doubled back against Fenner J♣ 10♣ > A♠ K♣ when flopping the 10♥ and his pair of Tens holding, before eliminating Fenner in third in another gripping hand.

On a flop of Q♥ 7♣ 4♥, du Plessis (7♥ 6♥) four-bet all-in and was called by Fenner (10♥ 9♥). Di Plessis was ahead with his middle pair, but Fenner needed any heart for a better Flush draw. Fortunately for du Plessis, the board completed with the 3♠ and K♣ and Fenner was eliminated in third – Eugene du Plessis taking 2.69 million chips into the heads-up against Daniel Brits´ 3.04 million chips.

After the final table of the WPT Emperors Palace Poker Classic had taken less than two hours to be reduced to two players, it was not inconceivable that there would be a fast conclusion to the tournament; however a remarkable heads-up encounter ensued in which the chip advantage changed several times without either player being all-in.

The final hand was a corker, and a fitting conclusion to the action that had preceded it. Du Plessis had made it 200,000 chips to play from the button. Brits had called and both players saw the flop of Q♦ 7♠ 2♦. Brits initially checked his hand in the post-flop betting, but after du Plessis had made a continuation bet of another 200,000 chips, Brits announced he was all-in and du Plessis made the call.

The Turn 9♣ and River Q♣ gave Daniel Brits trip Queens, and he had become the newest member of the WPT Champions Club by taking down the Emperors Palace Poker Classic Main Event.