Frederik Jensen took down the PokerStars EPT Madrid to emulate the performance of his friend and compatriot Mickey Peterson – who won last month´s EPT Copenhagen. 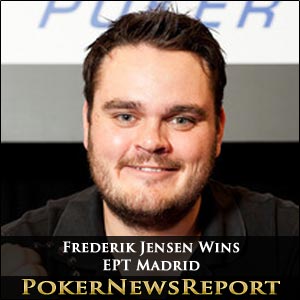 Danish poker player, Frederik Jensen, made it a Dane Double late on Saturday night in Madrid, as he took down the PokerStars-sponsored EPT Madrid Main Event to emulate the performance of his friend and compatriot Mickey Peterson – the player who took a home town victory in last month´s EPT Copenhagen Main Event.

However, whereas Peterson had to endure a six hour heads-up marathon to claim his title, the climax of the EPT Madrid was as brutal and as rapid as the preceding five days.

Ibanez Shares His Chips Around

The final day had started with last-Spaniard-standing – Ricardo Ibanez – well in control with a massive chip advantage over Jensen and Scotland´s Fraser Macintyre. Spanish hopes of a first ever EPT winner remained high throughout the first few levels despite Ibanez playing like a sieve, and it was his generosity that kept the game alive for the three short stacks at the final table – Ilan Boujenah, Jason Duval and Nicholas Levi.

Jason Duval, who had qualified for the EPT Madrid via an online poker satellite, was the first to depart – shoving with 7♥ 7♣ into Andrei Stoenescu´s A♥ K♦ and seeing the A♣ first out on the flop. As so often happens on final tables, when one goes others quickly follow, and Duval´s footsteps to the cashier were soon being trodden by Nicholas Levi (lost with K♠ Q♦ v 7♣ 7♦ of Bruno Lopes) and Ilan Boujenah who, despite making two pairs with his A♠ J♠ could not catch up to the flopped straight of Bruno Lopes (K♥ Q♥).

The Spaniard, Scot and Romanian

Ibanez had been playing pretty much the same way as on Friday, but without the results/luck. He was playing hands that most players would have laid down as soon as they were dealt and, in one such hand, relinquished the chip lead to Fraser Macintyre when playing 3♥ 6♠ (the 3♥ paired on the flop) all the way to the river against Macintyre´s A♦ 9♣ (The A♦ also paired on the flop). Macintyre remained as chip leader through the early eliminations until running into Andrei Stoenescu´s straight flush cost the Scot 1.5 million chips.

Stoenescu increased his chip advantage with the elimination of Ricardo Ibanez who, in typical fashion had shoved with A♥ 2♦ on a flop of Q♥ 2♥ J♣. Unfortunately for the Spaniard´s supporters, Ibanez was called by Stoenescu who has holding Q♠ Q♦ and that was the end of the dream for a Spanish winner of an EPT Main Event. Meanwhile, Jensen – who had been left as short stack after the four previous departures started a run which saw him take  a million chips from Fraser Macintyre in a A♥ K♥ v A♣ 10♥ race and crush Bruno Lopes when his 6♣ 5♥ found two pairs on the board to master Lopes´ K♣ K♦.

Lopes was soon to lose the remainder of his chips to Stoenescu, after which a three-way deal was agreed upon which saw Jensen guaranteed €385,000, Stoenescu guaranteed €330,000 and Macintyre guaranteed €290,000 with €110,000 to play for. Stoenescu did not stick around for long to get involved for the extras – quickly losing a chunk of his stack to Macintyre and then calling Jensen´s shove (6♠ 7♠) with K♦ 8♥ on a flop of 5♠ 8♠ 10♦. Although the K♠ on the turn gave the Romanian two pairs, it also completed Jensen´s flush and, with the Q♣ on the river, the game was now heads-up.

Jensen is the Master of Madrid

Jensen went into the Heads-Up with almost a 2:1 chip advantage, and that quickly became a 4:1 chip advantage when he rivered a straight in the second hand of the duel. Whereas EPT Copenhagen Peterson had to battle through six hours of heads-up play, Jensen wrapped his game up in six hands – the conclusive one being when Macintyre shoved with A♦ 9♠ into Jensen´s A♣ 10♥. With no 9 on the board to help the Scotsman (who incidentally qualified for the tournament through the [geolink href=”https://www.pokernewsreport.com/pokerstars”]PokerStars[/geolink] “Steps” SnGs), Jensen became master of Madrid, collected a cheque for €495,000 and the title of EPT Champion.