Another lady has taken out another WSOP event. This time it was Dana Castaneda, who beat a field of 2,883 to win the $1,000 No Limit Hold’em event. 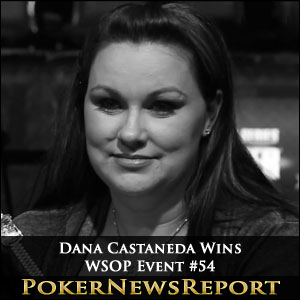 A day after the ladies only event was held, another lady has taken out another WSOP event. This time it was Dana Castaneda, who beat a field of 2,883 to win the $1,000 No Limit  Hold’em event.

Kenneth Gregersen was the first player to be knocked out of the final table after his Jacks were beaten by Barry Hutter’s K♣ Q♣ on the river when the K♦ was the last card shown.

Joseph Wertz and Jacob Bazeley finished up in eighth and seventh place respectively after they were on the receiving end of a double elimination that came at the hands of Jason Bigelow. Wertz, who had J♥ 9♣, moved all in for his last 310,000 chips before the flop and was reraised all in by Bazeley, who was in front with A♣ Q♦.

Waiting in the small blind, however, was Bigelow, who himself moved all in with A♠ A♦. Neither Wertz nor Bazeley were able to smash the pocket rockets on the 4♠ 7♣ J♣ 6♣ 4♥ board and they were both eliminated from the final table at the same time. It was a huge hand for the final table as the event was put down to six players in one hit.

The man who claimed the first scalp of the final table, Barry Hutter, was himself eliminated from the event in sixth place. It came after he lost his final hand to the eventual winner, who made a risky call on Hutter’s all in after the flop.

Castaneda called the all in with 3♠ 3♥ after a flop of 10♦ 4♠ 4♣ was shown. Fortunately for her, Hutter had A♦ K♣ and still needed to hit a card on the turn or river to win the hand. Castaneda was able to put herself further in front after the river came 3♣, which gave her a full house and knocked Hutter out of the final table.

Philippe Clerc was eliminated after the very next hand when he was beaten by Michael Zucchet. Zucchet went all on on the turn with A♣ A♦ after the board showed 10♥ Q♦ 7♥ J♦ and was eventually called by Clerc, who was behind with K♣ J♠. The 3♠ on the river was largely irrelevant and Clerc was knocked out of the event in fifth spot.

The win did not help Zucchet very much, however, as he was the next player to be eliminated from the final table as Castaneda claimed her second final table scalp. Zucchet, who had Q♥ 8♦, went all in on the turn after the board showed 7♥ 6♦ A♠ 5♦, giving him an open ended straight draw.

Castaneda called with A♥ J♥, which had her in the lead but at possible risk of losing to a straight on the river. That did not happen, however, as the river showed the 8♥, which won her the hand and eliminated Zucchet in fourth place.

Next to go was Matthias Bednarek, who was the eventual winner’s second straight scalp at the final table. Bednarek went all in before the flop with K♣ J♠ and was called by Castaneda, who had him dominated with K♠ Q♠.

Castaneda got herself further in front after the Q♦ 3♥ 3♣ came on the flop, with the 6♥ on the turn essentially confirming her hand as the winner. The river came 9♥ and, with that, Bednarek was knocked out of the event in third place.

Bednarek’s elimination left just Castaneda and Bigelow as the last two players in the event, with Castaneda having an almost 5 to 1 chip lead when heads-up play got under way. Bigelow played aggressively in the early stages of heads-up play, raising pre flop on a number of hands and chipping himself up bit by bit. It did not help him much, however, as he ended up settling for second spot due to Castaneda’s stellar play.

In the last hand of the event, Bigelow called the big blind before the flop, while Castaneda checked. The flop came 7♦ 5♦ 7♠, which gave Castaneda a pair of Fives with her 9♦ 5♥, while Bigelow had a flush draw with Q♦ 2♦.

That prompted Bigelow to move all in, which was called by Castaneda, who was ahead, but in potential danger with two cards still to be shown. The 10♣ came on the turn, which kept Castaneda ahead and Bigelow needed either a Queen or a Diamond on the river to stay in the event.

It was not to be, however, as the 9♣ came on the river, which gave Castaneda a higher two pair, as well as the hand, the event, the WSOP Gold Bracelet and $454,207.