There are a few loose ends still remaining to be tied up regarding the PokerStars EPT Grand Final – not least of which is the treble success of Dan Smith. 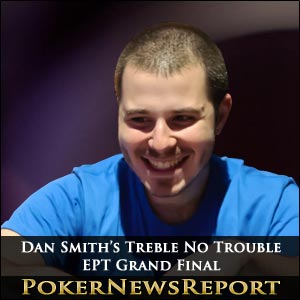 The great and the good of poker have vacated Monte Carlo now, but there are a few loose ends still remaining to be tied up regarding the PokerStars European Poker Tour (EPT) Grand Final – not least of which is the historic treble success of American Dan Smith.

Incredibly, the Las Vegas pro notched all three of his victories from €5,000 buy-in No-Limit Hold’em events at the Monte Carlo Bay Hotel & Resort for a total of $688,486 to become the first ever player to score a hat-trick of successes at an EPT festival.

Firstly, Smith bagged $201,972 for winning the Six-Max Turbo against 100 other entries, before following that up with a $330,724 pay day for taking down a side event when overcoming 174 others competitors.

Finally, on the last day of the Grand Final, Smith pocketed another $155,790 when agreeing a deal with English heads-up opponent Toby Lewis in the Six-Max side event that suggests the American was more interested in scoring a tremendous treble than adding even more bucks to his ever-growing bankroll.

Why do I say this? Well, Smith and 2010 EPT Vilamoura champ Lewis, who were pretty well equal in chips, got together to divide up the first two prizes that left the States star with the smaller share as the Londoner left with $170,469 as the ‘runner-up’ – even though Smith won the title after a high-card flip!

However, enormous piles of cash were definitely seen – and pocketed – in Monaco during the nine-day poker festival, with organisers reporting that this Grand Final created a new overall prize pool record of more than €19 million. That’s $25 million-plus, folks!

Can you imagine how much of that was spent before players even left the Côte d’Azur to journey home? Remember, Monte Carlo is not exactly known as an inexpensive destination – no matter how wealthy you might be.

Then again, maybe a few of the pros will still be hanging about in Monaco for the next few weeks ahead of the Formula One race to be staged around the principality’s streets on the 27th. You don’t think so? You know, you’re probably right. Why stand still when you can get some action on the felt?

Anyway, back to the poker tables in Europe, and EPT president Edgar Stuchly was thrilled to announce that another great for the EPT was topped off with the Monte Carlo Grand Final becoming the biggest and richest poker festival in Europe.

He’s right, of course, with 1,359 players from throughout the world converging on Le Sporting Casino from April 23 to May 1 to take part in 37 poker events that ensured Season Eight’s final leg will go down as the biggest ever stop on the EPT – at least until next season.

Stuchly also revealed that Season Eight – the most successful yet – of the tour attracted a total of 8,397 players from 85 nations to the 13 stops, including the Bahamas for the PokerStars Caribbean Adventure (PCA), to compete for more than €46 million (or somewhere about $61 million) from the main event prize pools.

But, even though next season’s tour will be cut back to just eight stops, Stuchly emphasised that plans are now well under way to make Season Nine even better for poker players and fans alike.

Season Nine definitely has a lot to live up to, but the planned schedule will provide a greater diversity in games, even more side events and better opportunities to qualify at numerous buy-in levels as the EPT will join up with local tours – including the Estrellas Poker Tour and the UK & Ireland Poker Tour (UKIPT) – to create much bigger festivals.

That’s the plan anyway, but we’ll have to wait and see if Stuchly’s hopes for the tour come to fruition.

All-Female Final a First for Tour

The 39-year-old Londoner – who is to marry renowned English actor and comedian David Mitchell – outlasted 27 opponents on her way to picking up $77,763 when beating the 25-year-old Texan.

Coren was obviously delighted with her success – which came ahead of her runner-up spot to Spanish Lock Pro Elite star Leo Margets in the €1,000 buy-in women’s event for another $14,456 – but also heaped praise on her American opponent when saying: It was lovely playing with Melanie, who played brilliantly and was fun and funny to talk to.

Margets, meanwhile, eventually took home $22,246 following a heads-up clash that saw chips move back and forward on numerous occasions after the Barcelona pro struck a deal with Coren to level the payouts slightly.

Ultimately, the final hand saw Margets’ ace-queen hold against the ace-nine of Coren to ensure that the 28-year-old former interpreter – who spends about six months a year in London – also lifted a huge trophy to round out a good festival after she also picked up $26,405 for finishing 57th in the €10,000 buy-in main event.

It’s almost certain that Margets was not partying too hard after the EPT Awards ceremony at Cafe Llorca in the principality’s Grimaldi Forum as she plans to add all of her $48,651 winnings to her bankroll for this summer’s World Series of Poker (WSOP) kicks off in seven weeks. May 27 is not that far off, so it’s probably a wise decision by Margets to save for the Las Vegas series.

Another player to enjoy a profitable Monte Carlo festival was Justin Bonomo. In fact, the American undoubtedly had the best of it in Monaco – scoring three impressive cashes as he ran hotter than the sun for a $2,562,614 earnings total.

That last event also became the biggest High Roller ever staged in Europe as 133 entries – which included 16 re-entries – created a prize pool of $4,389,845.

Germany’s Igor Kurganov emerged as the champion to earn $1,425,874 and leave Canadian Team PokerStars Pro Daniel Negreanu disappointed once again as he just missed out on his biggest ever single pay day – although he did have the consolation of adding another $790,304 to his live tournament prize earnings that now top $17 million!

In what was a thrilling heads-up encounter, chips again swapped hands many times as both players seemed poised for glory or defeat, before the final hand arrived. But it was really the previous hand that won the Russian the title. This is how it went…

The 3♦ came on the river and Negreanu bet 350,000 to leave him with 540,000 chips – before staring hard at his opponent. However, Kurganov was in no mood to back down and shoved the remainder of his stack into the middle.

A frustrated Negreanu could not contain himself, saying: F**k, how sick. How do you ever not have a straight now? I’m not going down like this. And, with that said, the four-time WSOP bracelet winner folded, only for the Russian to show the 9♥ as the gathered railbirds pleaded with him to reveal both his hole cards.

Kid Poker was in deep trouble now, with just six big blinds left, so immediately moved all-in on the next hand to, of course, be called by Kurganov.

Negreanu showed A♣ J♣ to dominated the K♦ 3♠ of Kurganov, prompting the bemused Russian to say: Really? Six big blinds and you find a hand like that?

However, his mood quickly changed when he gained top pair on a K♣ 5♦ 4♠ flop. The Russian then joked: Put a queen of clubs on there before the 5♣ arrived, eliciting a comment of that’s fun from Negreanu as he gained more outs with a flush draw.

But the 10♦ arrived on the river and that was that for the High Roller tournament as Kurganov overcame the North American superstar. Mind you, Negreanu also pocketed $409,279 after finishing sixth in the Super High Roller, so it was also a highly profitable few days for the 37-year-old.

Incidentally, eight-time WSOP champion Phil Ivey – a former Full Tilt Pro – picked up $96,643 for ninth spot in the High Roller and the American’s first cash in an open tournament in Europe since finishing 59th for $20,344 in the £5,000 buy-in No-Limit Hold’em main event of the combined United Kingdom and Ireland Poker Tour (UKIPT)/EPT London festival back in early October of 2010.

The French pro overcame 39 opponents to ultimately defeat Eastbourne’s Ziyard – who had won last year’s EPT Loutraki – to leave the Englishman with a €25,000 ($33,006) passport.

We at Poker News Report (PNR) will, of course, bring you all the latest from the EPT. Let’s not forget, too, that Season Nine kicks off in Barcelona on August 15 – and we’ll keep you informed of how that first stop of the overhauled tour plays out.