Dan Smith enjoyed his third $1 million+ payday with victory in the WPT Doyle Brunson Five Diamond World Poker Classic in the early hours of this morning. 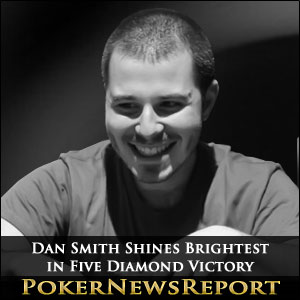 Dan Smith enjoyed his third $1 million+ payday with victory in the WPT Doyle Brunson Five Diamond World Poker Classic in the early hours of this morning.

The conclusion to the WPT Five Diamond World Poker Classic was, well, a classic. All six players who had survived the five previous days of the event came to the final table well stacked with chips, and it took nearly ten hours of play to determine a winner.

After 157 hands of poker, the winner was Dan “Holla” Smith – the youngest player at the final table, but who had two previous $1 million+ cashes prior to this event and who went into the final table of the WPT Doyle Brunson Five Diamond World Poker Classic as the chip leader.

Smith Off to a Flyer – Busts Serock in Sixth

When the six players took their seats at the Bellagio Poker Room in Las Vegas to battle out the conclusion to the WPT Five Diamond World Poker Classic, they were just a few hands into Level 26 (blinds 20K/40K – ante 5K).

The first major action occurred after three orbits of the button when Dan Smith (A♣ 10♣) rivered the A♠ to take a 780,000 pot from Barry Hutter, but Hutter immediately recovered in a hand against Gary Benson, and it was Joe Serock who had become the shortstack, virtue of not picking up any blinds and antes in the pre-flop action.

Eventually, Serock´s frustration got the better of him and, having had his big blind attacked again by Dan Smith (A♥ J♠), Serock shoved from the Big Blind with Q♠ 10♥. Smith´s Ace paired on the flop, and Serock was out of the WPT Five Diamond World Poker Classic in sixth place.

Hutter Goes in Fifth – Nobody Else Wants to Leave

Barry Hutter had been unlucky on the penultimate day of the WPT Five Diamond Classic to have lost a substantial proportion of his chip stack when running into Gary Benson´s Quad Queens, and again he was unlucky when shoving with A♠ K♣ to run into Eddy Sabat´s K♥ K♦ and be eliminated in fifth place.

Sabat´s elimination of Barry Hutter moved him up into second place on the leaderboard, but the respective placings remained unaltered throughout the remainder of Levels 26 and 27. It was only at the beginning of Level 28, when Sabat rivered an Eight-high straight that there was any threat to Dan Smith´s chip dominance, and the pair were then joined at the top of the leaderboard by Gary Benson when he recovered earlier loses against Shaun Suller A♣ A♠ > A♦ 8♣.

After doubling up Gary Benson, Shaun Suller shoved five times at the beginning of Level 29 (blinds now 40K/80K – ante 10K) enabling him to chip up quickly over 1.5 million chips. However, he was undone in his sixth attempt to steal the blinds and antes when he ran his A♦ 9♦ into Eddy Sabat´s Q♥ Q♦ and was eliminated in fourth place.

With three well-stacked players, the chip lead exchanged hands multiple times through the remainder of the level – Sabat ending Level 29 in front after forcing Gary Benson out of a 3.3 million chip pot. But Eddy Sabat´s participation in the WPT Five Diamond World Poker Classic would not extend beyond the next level.

A flopped Flush enabled Dan Smith to double up at the beginning of Level 30 (blinds 50K/100K – ante 15K) and reduce Sabat to less than 2.5 million chips. Gary Benson´s chip stack also took several hits as Dan Smith used his chip advantage to control the action, and Smith took a commanding chip advantage into the heads-up when busting Eddy Sabat in third K♠ Q♠ > A♣ 9♦ after the board delivered K♦ J♣ 6♠ / 3♣ / 10♠.

Losing chips so quickly, Benson was forced to shove with 4♦ 4♣ and Dan Smith made the call with K♠ 10♦. The flop of 10♣ 9♣ 4♦ paired Smith´s hand, but offered the opportunity of a backdoor flush for Benson. The Turn (9♦) and River (7♥) failed to produce the cards that Gary Benson needed, and Dan Smith was the WPT Doyle Brunson Five Diamond World Poker Classic Champion.