Smith has shot into the top 10 of the Global Poker Index (GPI) 300 after scoring a terrific treble triumph at the recent EPT Grand Final in Monte Carlo. 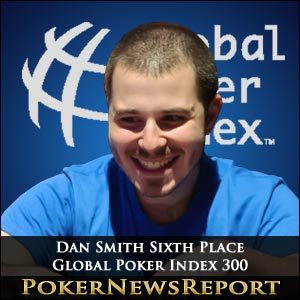 American Dan Smith has shot into the top 10 of the Global Poker Index (GPI) 300 after scoring a terrific treble triumph at the recent European Poker Tour (EPT) Grand Final in Monte Carlo.

The Las Vegas poker pro climbed an impressive 99 places on the rankings to secure sixth place – just 8.85 points behind Ukrainian Team Poker Stars Pro Eugene Katchalov – on 2,430.18 after a trio of victories in €5,000 buy-in No Limit Hold’em events in Monaco.

Smith started the Grand Final with victory in the Six-Max Turbo event for $201,972, then took down a $330,724 success in another No-Limit Hold’em side tournament, before concluding his highly profitable stay at the Monte Carlo Bay Hotel & Resort by winning the Six-Max competition for $155,790.

However, it’s no great surprise to see Smith zooming up the top 300 as he won the Aussie Millions AUD$100,000 buy-in No-Limit Hold’em Challenge event for $1,041,828 back in January, before following up with two more cashes in mid-April as the EPT stopped off in Berlin.

Incredibly, Smith has already made the money in six events this year, winning four, to ensure that his rapid rise up the GPI continues since he first appeared inside the top 300 back on December 5.

As if that wasn’t enough to convince you of this rising star’s pedigree – Smith has managed to secure $1,748,943 in live tournament earnings within the first four months of this year, as opposed to $628,688 from the previous three years combined since he recorded his first cash way back in September of 2008 when he pocketed $30,383 for taking seventh in the EPT Barcelona €2,000 buy-in No-Limit Hold’em event.

However, Smith is not the only big-name pro to break into the top 10, with Team PokerStars Pro Daniel Negreanu striding in at 10th place after climbing 33 places following the Canadian’s runner-up finish for $790,304 in the €25,000 buy-in High Roller in Monaco.

The four-time World Series of Poker (WSOP) champion from Toronto – who holds 2,280.75 points to sit just 7.71 behind fellow Canadian Team PokerStars Pro Jonathan Duhamel – also boosted his position on the GPI by earlier taking sixth place in the €100,000 buy-in Super High Roller in the tiny principality for $409,279.

After what has been a fairly quiet few weeks on the top 10, it’s almost all-change as only the leading two – Frenchman Bertrand ‘ElkY’ Grospellier (number one on 2,927.31 points) and his fellow Team PokerStars Pro Jason Mercier (second on 2,909.39), of Hollywood – retain their positions.

Sands enjoyed a fantastic WSOP last year, making the money so often that the previous GPI list could find no place in Period 2 for his third spot in event #22, a $1,500 buy-in Pot-Limit Omaha tournament, for $113,383 as he had already hit the maximum four results.

However, with Sands’ fourth place for $200,371 at last year’s EPT Grand Final €25,000 buy-in No-Limit Hold’em High Roller ageing into Period 3, that PLO score now counts in Period 2 to boost his score by 25 points.

Additionally, the Vegas-based pro picked up 81 more points when his eighth place for $26,818 at last year’s EPT San Remo €10,000 buy-in No-Limit Hold’em event aged into Period 3 – having previously been excluded from Period 2.

However, while Negreanu, Schwartz and Smith soar ever-higher, a third Canadian in former Full Tilt Pro Shawn Buchanan slipped 11 places into 17th on 2,244.14 points – exiting the top 10 for the first time since September 12.

The 29-year-old British Columbian has just two scores counting in Period 1 after his 41st place finish for $6,537 at last November’s BC Poker Championships CAN$2,700 buy-in No-Limit Hold’em main event in Richmond aged into Period 2.

Now, with no result replacing that ageing tournament in Period 1, Buchanan lost 122.81 points because he already has four higher scoring results in Period 2, so meaning the British Columbia result does not count for now.

While Smith enjoyed the biggest points gain and second largest move up the rankings, there were other pros that also made big climbs following the Monte Carlo poker festival.

Negreanu secured the second biggest points gain after his runner-up in the Eight-Max High Roller event to move into 10th, while Germany’s Philipp Gruissem took third for $483,213 to climb 29 places into 23rd on the GPI when adding 434 points to have an overall score of 2,168.23.

Bonomo hadn’t recorded a money finish for seven months to drop out of the GPI 300 in March, but bounced back with a vengeance into 74th place after winning the Super High Roller in Monte Carlo for $2,165,217.

He also picked up $46,209 for finishing in 28th at the €10,000 buy-in No-Limit Hold’em main event in Monaco, with his third score – which was only added to his Period 1 for this latest list – really putting the exclamation mark on his incredible return.

Meanwhile, eight-time WSOP bracelet winner Phil Ivey might have just missed out on the final table in that tournament, but his ninth place for $96,643 was enough to see the American superstar return at 278th on 1,077.48 points.

The 36-year-old – who boycotted last year’s WSOP in support of the many American online poker players who have still to gain access to their frozen accounts with Full Tilt Poker – did not play any tournaments last autumn, resulting in his omission from the GPI since September.

Unfortunately, for Ivey, his victory Down Under does not count towards his GPI score as only events with at least 21 starters can be included, so resulting in the 16-player Challenge being excluded.

But his other Australian cash, combined with his Monte Carlo finish, ensures that Ivey now has two results counting in the crucial Period 1 category.

While I’m mentioning players returning to the GPI, Florida’s James Calderaro made his presence felt at 204th on 1,195.36 points when finishing second for $236,560 at the WPT Jacksonville $10,000 buy-in No-Limit Hold’em main event.

Calderaro dropped off the list in mid-December, having not made the money since his 260th place for $40,654 at the WSOP $10,000 buy-in main event last July, before finally picking up $10,185 for 18th in January’s $5,000 buy-in No-Limit Hold’em main event of the Southern Poker Million Dollar Heater in Biloxi, Mississippi.

Now, with this WPT cash adding to his Period 1 score, Calderaro is back where he will undoubtedly feel he belongs.

Returning to Monte Carlo for a moment – or two – Idaho’s Kevin MacPhee climbed 19 spots into 39th on 1,882.46 points after taking the runner-up spot in the EPT Grand Final Six-Max Turbo High Roller for $184,968.

This is only MacPhee’s second time inside the top 50 on the GPI, but he has been steadily rising throughout spring to now have four scores counting in Period 1. The American has now made the money three times since his EPT Deauville victory in the €5,000 buy-in No-Limit Hold’em Six-Max High-Roller for $65,757 back in early February.

Lithuanian Dominykas Karmazinas picked up $79,875 for exiting in fourth place – just two spots behind MacPhee in Monaco – to record the fourth biggest climb by moving up 80 places into 98th when adding 268 points to now hold 1,544.19.

Returning to Jacksonville, New York State’s Will ‘The Thrill’ Failla not only earned $54,704 for his sixth place finish in the WPT main event to climb six spots into 20th on 2,190.52 points, but once again moved to the top of the WPT Player of the Year Race leaderboard.

Three other pros secured notable improvements in their rankings after good performances in Monte Carlo, with the Czech Republic’s Vojtech Ruzicka climbing 65 spots into 138th on 1,390.97 points, London’s Toby Lewis rising 49 to 45th on 1,827.04, and Ukrainian Alexander Dovzhenko taking 49th after zooming up 47 on 1,793.01.

Little Calm Before the Storm!

It has certainly been a busy few weeks on the poker calendar – and that won’t change now that the EPT Grand Final is out of the way. There is very little time for us to catch our collective breaths as the WPT Championship begins in Vegas on Saturday.

The eight-day poker festival at The Bellagio will include a $25,500 buy-in No-Limit Hold’em main event that brings the tournament to a close on the 26th.

Then there is the small matter of the 43rd staging of the WSOP, when thousands of players from throughout the planet will converge on the Rio All-Suite Hotel & Casino at the end of the month to compete in 61 bracelet events.

The $500 buy-in Casino Employees No-Limit Hold’em tournament kicks off the series on Sunday, May 27.

However, results from both these enormous festivals won’t affect the GPI for some time yet, so expect to see little movement inside the GPI 300 – other than through ageing scores – over the next few lists.