The six-handed final table of the WPT Five Diamond World Poker Classic was set last night, with Dan Smith leading the way towards the $1,161,135 first prize. 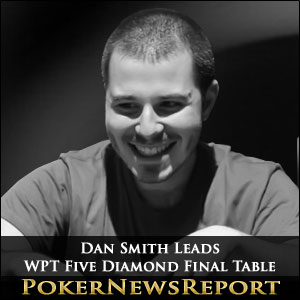 The six-handed final table of the WPT Five Diamond World Poker Classic was set last night, with Dan Smith leading the way towards the $1,161,135 first prize.

Day 5 of the WPT Doyle Brunson Five Diamond World Poker Classic saw twenty-one players return to the felted tables of the Bellagio to play down to a final table of six. Each of the players was already assured of a $30,379 payday, but a seat at the final table would guarantee them $175,766.

Heading the leaderboard at the start of play was Jean-Robert Bellende – who had bust out Brian Rast A♦ A♠ > A♥ 10♥ shortly after the bubble had burst on Day 4 – but Bellende was one of a number of players who was to fall to Dan Smith during the five-and-a-bit levels of play yesterday.

Day 5 of the WPT Five Diamond World Poker Classic started how Day 4 had finished – with players getting turned over by bad beats. Tony Gargano was the first player to leave the action on Day 5 when his A♠ K♦ was bested by Eddy Sabat´s A♦ Q♦ and, after Tyler Kenney had been eliminated in twentieth position (A♦ 8♦ < A♣ 10♠ by Joe Serock), Dan Martin saw his Aces cracked by Shaun Suller´s 8♦ 8♥ to depart the tournament in nineteenth place.

As the remaining eighteen players congregated around two tables, Will Failla found to his cost that small pocket pairs (7♥ 7♣) do not always hold up against A♠ K♠ as he was bust by Dan O´Brien; but Jean-Robert Bellende found that big pocket pairs sometimes do hold when eliminating Alex Condon K♣ K♥ > A♠ K♠ to increase his advantage at the top of the leaderboard.

Dan Smith Runs Up His Stack with Help from Red Tens

Dan Smith had started Day 5 of the WPT Five Diamond World Poker Classic with an average stack of 528,000 chips (44 big blinds), but a fortunate double-up against Stephen Silverman 10♦ 10♥ > K♠ K♦ (Smith rivered the 10♠) enabled him to chip up over the million chip mark. Smith finished off Silverman a few hands later A♥ 9♥ > K♥ Q♥ and then went on a roll.

Prior to Dan Smith´s late run, the chip lead had been held by Barry Hutter – who was the first player to breach the 2 million chip mark when eliminating Hyon Kim in fifteenth place A♦ 9♣ > A♠ 6♠. However, Hutter took two significant hits to his chip stack – the first being when Eddy Sabat found pocket Queens to double-up against Hutter, and the second when Gary Benson improved his pocket Queens into Quads to finish the night in second place on the leaderboard.

The final table of six was set when Curt Kohlberg moved all in from the small blind for 495,000 chips with 2♥ 2♠ and was called by Shaun Suller (J♦ J♥). The Jacks held up for Suller to eliminate Kohlberg in seventh place and move him up into third place on the overnight chip counts – ahead of Joe Serock, Eddy Sabat and Barry Hutter.

When the final table of the WPT Five Diamond World Poker Classic gets underway this afternoon, the six remaining players will be just a few hands into Level 26 (blinds 20,000/40,000 – ante 5,000). Play will continue until a winner is found and, with all of the players having at least 30 Big Blinds, the game might not be over that quickly.