Dan ‘Holla’ Smith took a late chip advantage on Day 1A of the EPT Monte Carlo Main Event following a rather subdued turn out for the climax of EPT Season 9. 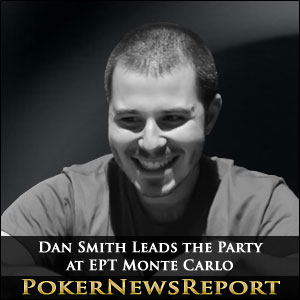 Dan ‘Holla’ Smith took a late chip advantage on Day 1A of the EPT Monte Carlo Main Event following a rather subdued turn out for the climax of EPT Season 9.

It is not unusual for there to be lowly number of entrants for a Day 1A in any poker tournament – especially when it is played on a Monday following a night of online ‘Majors’ – but organisers of the EPT Monte Carlo must be hoping for a bumper Day 1B after only 108 players ponied up the €10,000 buy-in for the Main Event yesterday – 163 fewer than the corresponding day last year.

However, what was missing in quantity was made up in quality as players of the calibre of Marvin Rettenmaier, Vanessa Rousso and Jonathan Duhamel all left the comfort of their hotel beds to compete in the Salle des Etoiles. Sadly, none of the aforementioned stars of the poker world made it through to Day 2, after just 53 players survived a fairly subdued eight levels of play.

Dan Smith (136,500 chips) took the chip lead in one of the final hands of the day after it looked like Pablo Fernandez (135,900 chips) was going to have the honour of being overnight chip leader. Behind the two pace-setters, Freddy Deeb bagged up 133,900 chips after his J♦ 10♦ found a Full House to cripple Thanh Hai Pham and thereafter there is a small gap to Arlo Dotson, who finished Day 1A of the EPT Monte Carlo Main Event with 127,100 chips.

Jake Cody was the best performing PokerStars Team Pro – ending the night in fifth position with 119,000 chips – while recent runner-up in the WPT LA Poker Classic Paul Volpe (110,800 chips) and current leader of the EPT Player of the Year leaderboard Jan Bendik (108,900 chips) also made it into the top ten chip counts. Players who would also consider their first day successful include Ole Schemion (83,200 chips), James Mitchell (81,000 chips) and Barry Greenstein (70,000 chips).

Looking Ahead to EPT Monte Carlo Day 1B

Amongst those who are expected to register for Day 1B of the PokerStars-sponsored EPT Monte Carlo Main Event are Daniel Negreanu and Jason Mercier, with EPT regulars Eugene Katchalov, Kevin MacPhee and Bertrand Grospellier also joining the fray. Team GB is likely to be well represented by Chris Moorman, David Vamplew and Max Silver and the girls are also in town, with Victoria Coren having overcome the inevitable delays on Eurostar to join up with Liv Boeree, Vanessa Selbst and Melanie Weisner – all of whom are expected to make an appearance at the Salle des Etoiles when Day 1B of the EPT Monte Carlo Main Event starts at midday CET.