Dan Smith Fourth on GPI Player of the Year

Dan Smith zoomed into fourth place on the GPI Player of the Year standings after winning two €5,000 buy-in events at the recently completed EPT Grand Final. 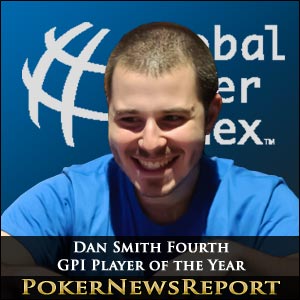 Actually, the Las Vegas pro picked up a record-setting hat-trick of titles at the Monte Carlo Bay Hotel & Resort after also securing the €5,000 buy-in No-Limit Six-Max side event, although that last score won’t count towards his points total until next week.

While most poker fans were concentrating on what was happening in the main event, Super High Roller and High Roller tournaments, Smith was quietly picking up points to climb 151 spots into fourth on the PoY leaderboard on points.

American Not Far Behind Top Spot

Those first two victories, in the Six-Max Turbo and a side event, saw Smith add 247.05 points to his score for him to now sit at 418.40 – just 36.44 points behind third-placed Frenchman Bertrand ‘ElkY’ Grospellier and 64.42 in arrears of Andrew Badecker in second, while he has closed the gap on leader Jonathan Duhamel to 177.28 points, before his third score from Monte Carlo is included on next week’s PoY list.

Notably, French-Canadian Duhamel – who held a 253-point advantage over Quebec’s Erik Cajelais at the top of the rankings as recently as the start of last month – has seen that lead shrink to just 112.86 after American Andrew Badecker surged into second place with a series of cashes over the past few weeks.

Vyacheslav Igin Up Into Sixth

London-based Jacobson has, meanwhile, cashed five times in Europe this month – including two at EPT Berlin and two more in Monaco, while Vegas’ Koon, who had been ranked as high as 11th at the start of last month, finished in 21st place for $25,056 at the WPT Seminole Hard Rock Showdown $10,000 buy-in No-Limit Hold’em Championship event in Hollywood last week to break into the top 10.

Castelluccio also zoomed up the rankings with his fourth place for $528,102 in the EPT Grand Final main event as the PoY standings saw some big movers and fallers.

However, May will almost certainly see things quiet down as thousands of players gear themselves up for the 43rd staging of the World Series of Poker (WSOP) at The Rio All-Suite & Casino in Vegas.