Dan Heimiller Leads the Legends of Poker into the Money

A very late finish to Day 2 of the Legends of Poker Main Event at the Bicycle Casino in LA saw Dan Heimiller burst the bubble and take the lead in the event. 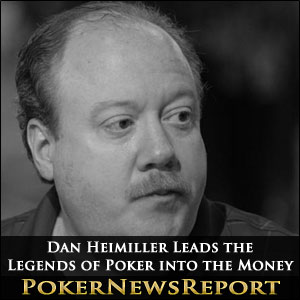 A very late finish to Day 2 of the Legends of Poker Main Event at the Bicycle Casino in LA saw Dan Heimiller burst the bubble and take the lead in the event.

The Legends of Poker Main Event eventually got into its stride yesterday after three Day 1s of entries, re-entries and late registrations and after organisers had worked out that there had been 716 entries, and that the top 72 players would cash in the $3,700 buy-in tournament.

306 players (including 47 players who registered at the start of Day 2 – even though it meant they were starting with just 25 Big Blinds!) took their seats at the Bicycle Casino in Los Angeles to try and overtake Fabrice Touil (272,200 chips) and Ryan Goindoo (269,000 chips) at the top of the leaderboard – with mixed fortunes.

That Wasn´t in the Script

Several players bust out in the first level of the day (Level 11 – blinds 600/1,200 – ante 200) including Paul Volpe, David Pham, Mohsin Charania and late registrant Jim Collopy, while some only lasted as long as the first hand – Andy Frankenberger bust out chasing a straight draw against a top set.

Others however, had a great start to the day. Max Waxman trebled up when he got his AQ in against two players who had both been dealt pocket Kings – and hit an Ace on the Flop – and Greg Mueller was another of the players leaving it until the last minute to register for the event and twice doubled up within ten minutes!

Joseph Cheong enjoyed an incredible start to 2013, culminating with a victory in the Manila Millions, but recently he can´t win a hand against himself! Having just finished two spots from the money in the $100,000 buy-in WPT Alpha8, Cheong called a player shoving with pocket Aces while holding K♣ J♠. Two Kings on the flop put Cheong in control of the hand, but an Ace on the River reduced him to 11,000 chips and he was bust shortly afterwards.

Meanwhile Dan Heimiller was involved in the biggest pot of the WPT Legends of Poker Main Event when calling a six-bet shove by Tyler Cornell (A♥ Q♠) with Q♦ Q♣. The Q♥ on the Flop gave Heimiller the lead in the hand, but he had a sweat on when the A♣ was dealt on the Turn. However a blank River elevated Heimiller into the chip lead and bust Cornell from the tournament.

Dan Heimiller extended his chip advantage during Level 13 (blinds 1,000/2,000 – ante 300) when he was again dealt pocket Queens and again hit a set on the Flop. Chipping up to 520,000 chips, he was one of only four players through the 500,000 chip barrier at the end of Level 14 but, after the dinner break, Faraz Jaka shot into a huge lead when rivering a set of Nines against one of the overnight chip leaders – Ryan Goindoo – to take his stack up to 830,000 chips.

The other overnight chip leader – Fabrice Touil – had been running well throughout the early levels of the day, but during Level 15 (blinds 1,500/3,000 – ante 500) joined a table dominated by Phil Laak, and quickly started shipping chips to the former WPT Champion (he was eventually knocked out by Laak three hands from the end of play). Meanwhile, Faraz Jaka was on the ultimate rollercoaster and crashed down to 236,000 chips at the end of the day after having his Aces cracked by a flopped set of Sevens and losing a flip QQ < KK.

Faraz Jaka was not the only player to suffer from having his Aces cracked. Bobby Suer was bust from the WPT Legends of Poker in cruel fashion when he got his last 180,000 chips in with pocket Aces and was called by two players – one holding pocket Kings, and the second holding King-Queen suited. Incredibly the first card out on the Flop was a King!

Possibly an even crueller bad beat was suffered by Dan O´Brien (A♦ A♠), who moved all-in on a board showing J♦ J♥ 3♣ / 7♣ / A♣ for a Full House. He was called by Craig Gold, who had carefully slowrolled his pocket Jacks for Quads! O´Brien failed to recover from the bad beat and was bust from the tournament by the end of the night.

The evening drew to a close a little later than advertised as, when Level 17 finished, just 73 players remained. It was decided to play down to the money, so that players who returned for Day 3 were assured of a $7,050 min-cash. However, two players were knocked out simultaneously:-

The actor Ashton Holmes got the last of his chips in the middle with A♣ K♥ and was called by David Tuchman (J♥ J♦). The board ran Queen-high and Holmes was out. However, at the same time Dan Heimiller (Q♥ 7♥) had just raised on a board of A♣ 10♠ 7♠ / 9♥ / 9♦ effectively putting Jake Schindler all-in. Schindler (K♦ 5♦) tanked for five minutes before making the call with air, and was bust in joint seventy-first place – Heimiller chipping up to over one million chips.

With the game just having entered Level 18 (blinds 3,000/6,000 – ante 1,000) the plan for Day 3 of the WPT Legends of Poker Main Event is to play down to the final eighteen. Everybody remaining in the tournament is now assured of cashing in the event, but those with their eyes on the first prize of $613,355 include-