The second big tournament of the Borgata Open Series has just finished its five opening flights, with Dan Heimiller leading a host of familiar faces into Day 2. 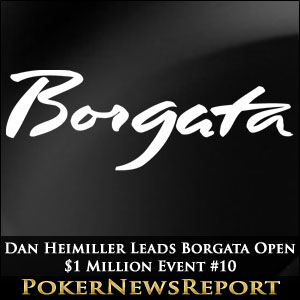 The second big tournament of the Borgata Open Series has just finished its five opening flights, with Dan Heimiller leading a host of familiar faces into Day 2.

The current Borgata Poker Open Series comprises of twenty-four main events spread out between Tuesday 2nd September and Friday 19th September. It kicked-off last week with the shock win of Jonathan Evans in the $2 million guaranteed Event #1 and reaches its climax with the $3 million guaranteed WPT Borgata Championship which starts next Sunday.

Prior to last night´s Day 1F, the overall chip lead had been held by Coleem Chestnut – who bagged up 605,000 chips at the end of Day 1B. However, a new chip leader in the tournament emerged last night in the familiar form of Dan Heimiller. Heimiller – who won the WSOP Seniors event in the summer – rarely travels this far north of Missouri, but he will be encouraged to visit more frequently if his good run continues to take him to Friday´s final table.

Heimiller stormed up the leaderboard late in Level 15 with a Turned Ace-high flush against an opponent with A♥ J♠ who had flopped two pairs and, at one point he had more than 800,000 chips after finding the K♥ on the River to pair his K♦ 9♣. Heimiller´s stack slipped a little in the final level of the night to 651,000 chips – and he will need a deep run in the tournament to show a profit for his efforts, having fired seven bullets over the course of the five opening flights!

Fierce Competition Lining Up to Challenge

Behind Dan Heimiller, a very strong pack of players sit well-positioned to make a challenge for the first prize. Florida poker player Bryan Morton finished the night with 524,000 chips after cracking an opponent´s Aces with trip Sixes in the last level of the night, and Morton has a slight advantage over Kevin Grabel (520,000 chips) who finished seventh in Event #1 for $52,432.

Day 2 of the Borgata Poker Open Event #10 promises to be another long one as the 392 players battle their way through the money bubble and towards Friday´s ten-handed final table. The final table is going to be live-streamed for the benefit of those who like watching ten very tired players sitting around a table, with the most likely candidates to make a TV appearance including: