Dan Colman continued his amazing run of high-stake tournament successes with victory in the £60,000 buy-in WPT Alpha8 at the Palm Beach Casino in London. 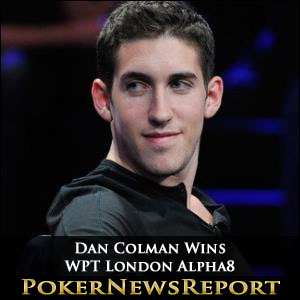 Dan Colman continued his amazing run of high-stake tournament successes with victory in the £60,000 buy-in WPT Alpha8 at the Palm Beach Casino in London.

The opening event in season 2 of the WPT Alpha8 Series saw seventeen unique players pony up the £60,000 buy-in, and six of them re-enter the event, to create a prize pool of £1,334,000. After eight 60-minute levels on Day 1 just eleven players remained; but the late entries Sorrell Mizzi and Faisal Alfalasi – and a re-entry by Max Altergott – meant that it took a further three levels of play to arrive at a final table of eight.

Despite being the shortest-stacked of the eight remaining players, Sorel Mizzi had a dream start to the WPT London Alpha8 final table – doubling up against Dan Colman A♣ Q♦ > 2♣ 2♦ and Isaac Haxton Q♦ Q♣ > A♣ Q♥}. Sam Trickett´s fortunes unfortunately went in the opposite direction, and he was the first player to leave the final table after moving all-in with A♥ K♥ and running into Talal Shakerchi´s A♠ A♦.

Players fell in quick succession thereafter, and Sorel Mizzi hit a lucky Jack to bust Christoph Vogelsang in seventh place Q♣ J♥ > A♦ K♦ before Vladimir Troyanovskiy´s A♥ 9♠ failed to improve past Talal Shakerchi´s A♠ Q♥ and Troyanovskiy was sent to the rail in sixth place. The four-player money bubble burst when Sorel Mizzi´s luck eventually ran out, and he was eliminated by Dan Colman K♦ Q♦ > Q♠ 10♠ after missing his open-ended straight draw.

With the money bubble burst Isaac Haxton took a shot at moving towards the top of the leaderboard, but he was bust in fourth place when running his K♥ Q♣ into Talal Shakerchi´s K♦ K♣. Thereafter, three-handed play was a tight affair; with Dan Colman leading the chip counts, but constantly being put in tight spots by Max Altergott and Talal Shakerchi.

At one point Max Altergott took a narrow advantage over Dan Colman, but a ten-high straight (from an opening pair of Sevens) against Altergott enabled Colman to regain the advantage – an advantage he used to good effect when eliminating Talal Shakerchi in third place Q♣ Q♦ > A♦ 6♥, and take a 1,613,000 -v- 687,000 chip advantage into the heads-up.

Despite the levels being reduced in length to 30 minutes, the heads-up conclusion to the WPT London Alpha8 remained a tight affair – with Dan Colman chipping away at his opponent before Max Altergott twice doubled up. At the end of Level 19 the two players made the decision to skip five levels and increase the blinds and antes to 50,000/100,000 (ante 15,000) – a decision which brought around an extraordinary conclusion to the event.

Going into what was now Level 25, Max Altergott took a narrow advantage following an uncontested shove, but Dan Colman immediately doubled back K♣ J♣ > A♠ 8♥ with a flopped pair of Jacks to cripple his German opponent. Altergott doubled-up straightaway A♦ 8♣ > K♣ 4♠, but the game was over in the next hand when Dan Colman (J♦ 8♥) hit a pair of Eights on the flop and it was good enough to hold on against Max Altergott´s K♠ 4♣.