The latest “made-for-TV” WPT Alpha8 tournament was played this weekend at the Emperors Palace Hotel and Casino, with Dan Cates winning the high buy-in event. 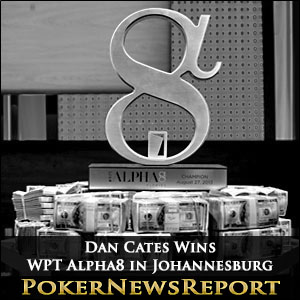 The latest “made-for-TV” WPT Alpha8 tournament was played this weekend at the Emperors Palace Hotel and Casino, with Dan Cates winning the high buy-in event.

The line-up for the WPT Alpha8 Johannesburg may have been small in numbers, but it was high in quality. Nine players ponied up the $100,000 buy-in for the televised event, and the total number of entries reached double figures when Antonio Esfandiari fired a second bullet after busting with pocket Kings against Jason Mercier´s pocket Aces during the fifth level of Day 1.

Phil Ivey and Max Altergott bust out in the later stages of Day 1 when it was too late to re-enter and, when the final seven players took their seats at the Emperors Palace Hotel and Casino for the concluding day, the relative chip stacks looked like this:

When the tournament resumed, the seven remaining players were entering Level 10 (blinds 1,500/3,000 – ante 500), and it was widely anticipated that Erik Seidel would be the first player to be eliminated from the tournament. However, in only the second hand of the day, Antonio Esfandiari (K♥ 6♥) moved all-in on a flop of Q♥ J♦ 7♥ and was called by Kinesh Pather (Q♠ J♥). Neither hearts nor Kings were dealt on the Turn (4♣) or River (10♦), and Pather´s two pairs were good enough to send Esfandiari to the rail in seventh.

Erik Seidel and Philipp Gruissem then got involved in a battle of the short stacks – Gruissem raising from the button with Q♣ 6♠ and Seidel moving all-in with A♠ 7♥. Gruissem made the call, and the Seidel paired his Seven on the flop of 10♦ 7♠ 4♠ to double-up and switch places with the previous dual Alpha8 winner at the bottom of the leaderboard.

Gruissem´s participation in the TV tournament lasted for just two more hands. The German moved all-in with A♥ 3♠ and was called by Jeff Gross (K♠ 10♥). Gruissem paired his kicker on the flop of 7♦ 6♠ 3♥, but the 10♠ spiked on the river to eliminate Gruissem in sixth place.

The WPT Alpha8 was quickly reduced to four players when Erik Seidel committed the last of his chips from the button with 7♦ 7♠ and Dan Cates called with 10♣ 10♦. Both players missed the board of 8♥ 6♠ 2♥ / 6♦ / A♦ and Seidel´s valiant attempt to cash in the tournament fell two places short of the money.

The only hands of significance over the couple of levels were when Kinesh Pather took a 100,000 chip pot from Jason Mercier with A♣ high to reduce the PokerStars pro to the position of short-stack, and when Pather moved into a clear second place with pocket Aces against Daniel Cates.

Kinesh Pather temporarily moved into the chip lead when flopping a Ten-high straight against Cates, but he was demoted to third place when Jeff Gross turned a Full House against the South African player to assume the lead at the top of the chip counts. Dan Cates then recovered top spot by default when Jason Mercier rivered Quad Kinds against Gross and, moving towards the end of Level 13, the four players were again closely matched:

Going into Level 14 (blinds 4,000/8,000 – ante 1,000), Dan Cates twice took down five hands in a row with pre-flop aggression to extend his lead, and both Jason Mercier and Kinesh Pather suffered big chip losses when they stood up against the “Jungleman”. Pather doubled-up against Jeff Gross A♣ Q♠ > J♠ 5♠ to keep his Alpha8 hopes alive, and it was Jeff Gross who was to be the event´s Bubble Boy when he was eliminated in fourth place.

Just two hands after doubling up Pather, and with 18 Big Blinds in front of him, Jeff Gross moved all-in from the button with A♦ 8♣ and Dan Cates did not hesitate before making the call with 8♦ 8♠. The board missed both players, and Cates was bust in fourth place, with the remaining three players assured of a $200,000 min cash.

Mercier Out in Third – Cates Takes Lead into Heads-Up

Jason Mercier was the next player to leave the WPT Alpha8 final table, but the circumstances of his demise were particularly unfortunate. Mercier was reduced to just three big blinds when his Aces were cracked by Kinesh Pather K♣ Q♥ > A♦ A♠ on the board of 10♥ 9♥ 5♥ / 7♦ / 2♥.

Following Mercier´s departure, the next twelve hands all went to Dan Cates without any of them going to showdown. Pather had been reduced to just 64,000 chips and chose to get them all-in on the thirteenth hand of heads-up play. Dan Cates made the call and the cards were on their backs:

Pather was a 70% pre-flop favourite to double-up, but the flop of 10♥ 9♦ 7♦ paired Cates´ hand to put him in the lead. Pather still had outs with a King to win the hand and an Eight would have chopped the pot after the Turn of J♥; however the 10♣ landed on the River to give Cates a Full House and the title of WPT Alpha8 Johannesburg Champion.

The WPT Alpha8 Johannesburg will be broadcast on the “all new FS1 network” at 10:00pm (EST) on Sunday 16 March.