Dan ‘Jungleman’ Cates is once again ready to provide one fortunate player with the $10,000 buy-in for the World Series of Poker (WSOP) main event. 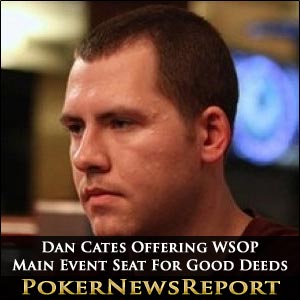 High stakes star Dan ‘Jungleman’ Cates is once again ready to provide one fortunate player with the $10,000 buy-in for the World Series of Poker (WSOP) main event.

The 22-year-old American – who is reckoned to be among the leading heads-up No-Limit Hold’em players on the planet – raffled off a WSOP main event seat last year, which was won by 50-year-old Las Vegas grinder Bob ‘PokerGrump’ Woolley, after taking to microblogging website Twitter to announce the draw.

This year, however, the winner will have to prove themselves worthy of earning the seat alongside the big-name pros in Vegas – with Cates asking entrants to perform a good deed, or more, and put it on to video.

It should be noted, though, that if you have played in the main event before, you are excluded from entering the competition.

Thereafter, all entrants will have to upload their recording to video sharing site YouTube and tweet the video to the Jungleman. While there is no upper limit on how many good deeds – and therefore videos – an applicant can perform, Cates stressed that all videos have to be with him by Wednesday, June 20.

That, of course, makes sense as this year’s main event kicks off on Saturday, July 7, so allowing Cates some much-needed time to peruse the many videos that will no doubt be with him by the closing date.

The lucky – and surely deserving – winner will be handed that WSOP main event seat worth $10,000, as well as their air travel, a room at the Rio All-Suite Hotel & Casino (if that’s the hotel you choose!), and even a free poker tutorial from Cates himself.

Cates – who only played his first WSOP last summer as he was too young in previous years – announced his plans on PartyPoker recently, saying:

I’m looking forward to the WSOP. My life has changed immeasurably in recent years and there is always mad stuff going on in the poker world. That said, I will never forget when I was playing low stakes in college and I don’t take for granted any success I have had. I want to give something back to those who are just falling in love with the game or haven’t had the opportunities I am lucky to have had.

Maryland’s Cates – who pocketed $300,000 for taking second place at last month’s PartyPoker.com Premier League Poker V No-Limit Hold’em tournament in Vienna – then went on to supply potential entrants with his rules for the competition. They are:

If you are keen to make the trip to Sin City, then get thinking about what you can do to impress the generous Cates. Good luck. But don’t delay as there’s only three weeks before the deadline…