Dan “Jungleman12” Cates, one of the biggest money winners in online poker’s history, has challenged any poker player to face him in a high stakes heads-up match to be played following the Prague Poker Festival scheduled for next month. 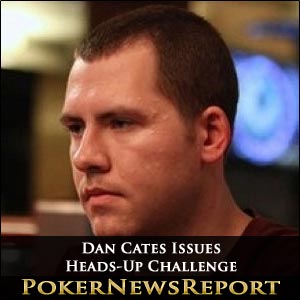 Dan “Jungleman12” Cates, one of the biggest money winners in online poker’s history, has challenged any poker player to face him in a high stakes heads-up match to be played following the Prague Poker Festival scheduled for next month.

The match is set for December 6th, with proposed stakes of 200-400 Euros and a sit-down minimum of 100,000 Euros, the day following the conclusion of the final table of the WPT Prague. The heads-up showdown, with an as yet unnamed challenger, will be shown on an internet stream revealing the players’ hole cards on a delay of fifteen minutes .

When asked the reason for such a challenge, Cates minced no words in his response, “I’m sick and tired of all the negative publicity the game of poker has received in the past few months. As someone who loves the game, I think the poker world deserves to know who the best poker player on the planet is. I’m confident that it’s me. If anyone has the nerve to take me on, let them come to Prague in December and sit down across from me at the table.”

Various websites report Cates’ profit in online poker over the years to be in the neighborhood of $7 million, with most of his winnings coming in heads-up No Limit Hold’em Poker. Last year, Cates accepted the Durrrr Challenge, a similar open challenge put forth by Tom Dwan that was scheduled to be an online match consisting of 50,000 heads-up poker hands. Cates was leading the match against Dwan, but the contest was suspended when Full Tilt Poker was shutdown. It will be interesting to see if Dwan accepts the latest challenge, but Cates insists the offer isn’t aimed at anyone in particular.

“This is not about the past,” he said. “I don’t run away from something once I start it. And there is no person alive who I will refuse this offer to play me.”

After the buy-in of 100,000 euros, re-buys will be permitted for a set period of time. The champion of the heads-up challenge will be determined by the player in the lead after a predetermined amount of time or when a losing player gives up and throws in the towel. Cates has gone on record as saying he won’t refuse any serious challengers. “Nobody can beat me, and I’m more than prepared to put my money where my mouth is,” Cates boasted.

The sportsbook site Matchbook.com will be accepting wagers on the match. A spokesperson for the betting exchange said, “There has already been substantial interest in this challenge, even without knowing who Jungleman’s opponent might be. Cates has very little experience playing live and he has never played in front of cameras with his hole cards revealed. There are people out there who think he cannot possibly win without his computer screen!”