Playboy Dan Bilzerian claims on Twitter to have decimated an unnamed player in a $5,000 – $10,000 Heads-Up NLHE game. 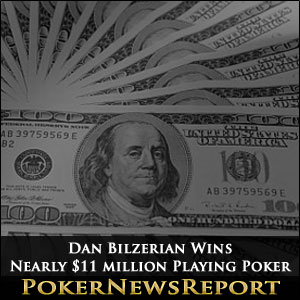 Playboy Dan Bilzerian claims on Twitter to have decimated an unnamed player in a $5,000 – $10,000 Heads-Up NLHE game.

The world first became acquainted with entrepreneur, actor and life extraordinaire Dan Blizerian during the 2009 World Series of Poker – not necessarily for his superior game, but for his larger-than-life personality. Known for leading a life of excess, Blizerian has been the victim of three heart attacks, all before his 30th birthday.  He’s also known for his high stakes gambling tendencies, and as one of only a handful of players who gambles on everything, and wins.

Yesterday on Twitter, “Blitz” posted that he had won $10.8 million playing $5,000 – $10,000 Heads Up poker. Although he did not specify the format, it is assumed that the combatants were playing No-Limit Holdem.

It is currently unknown whether Bilzerian’s statement is factual or part of an elaborate self-promotional scheme. He never names his opponent and provides no clue as to where the epic match took place. However, with that said, Bilzerian is known the world over as a fearless high-stakes gambler, and has played with high-profile celebrities and other prominent figures before.

Still, even the biggest name pros in poker rarely play at stakes exceeding $1,000 – $2,000, and even then, the games are typically full-ring. As a mode of comparison, the television program High Stakes Poker pitted today’s top poker pros and other rich enthusiasts against one another in a $400 – $800 game.

The only visual shared by Bilzerian in regards to his alleged victory was a shot of the private jet that will supposedly be taking him to Puerto Vallarta.

Bilzerian has indicated to the Daily Mail that he is worth approximately $100 million. A frequenter of the picture sharing site Instagram, Bilzerian has regularly posted pictures of piles of cash, cars, guns and women on his page, leading many of his 100,000 followers begging to switch their ordinary life with his.

According to his Wikipedia page, Dan is the son of Wall Street based American corporate takeover specialist Paul Bilzerian and the brother of Adam Bilzerian, who finished in the top 50 of the 2009 Main Event the same year Dan cashed.

Dan has gone on record defending Yankee third baseman Alex Rodriguez, stating that the accusations that he gambled illegally aren’t true and that he himself was present at some of the games Alex was supposedly a part of.