D’Amato Invited to be Witness at Online Poker Hearing

Alfonse D’Amato has been invited to testify as a witness at the hearing on internet gambling before the House Subcommittee for Commerce, Manufacturing and Trade. 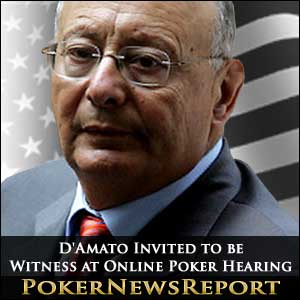 Poker Players Alliance Chairman Alfonse D’Amato has been invited to testify as a witness at the hearing on internet gambling before the House Subcommittee for Commerce, Manufacturing and Trade scheduled for October 25th.

“Given the committee’s interest in player protections, I think it is appropriate that someone from the PPA testifies,” said John Pappas, PPA’s executive director. “It’s certainly a big moment for the organization and we’re very excited that D’Amato has been invited.”

As reported yesterday here, the hearing was initially believed by PPA members to be a debate on HR2366, Congressman Joe Barton’s proposed bill on the Internet Gambling Prohibition, Poker Consumer Protection, and Strengthening UIGEA Act. It now seems that the hearing will focus more on the safety of internet gaming.

“I think there are different stakeholders who are not necessarily on board with Barton’s bill and would like to have a general discussion on how internet poker can be regulated,” Pappas said. “It will be a learning opportunity for the committee members to get their heads around an issue without confusing specific legislation. We think it will be good for building momentum.”

Pappas said that D’Amato is planning to speak on behalf of poker players and what they are expecting to see in new federal gaming legislation, including assurances that operators from [geolink href=”https://www.pokernewsreport.com/online-poker-rooms”]online poker rooms[/geolink] are solvent, the need for segregation of player funds, and that the online poker games are fair and legitimate.

Mary Bono Mack (R-CA) chairs the subcommittee which consists of nine Democrats and 14 Republicans, including Barton (R-TX). Bono is thought to be an opponent of online poker legislation, though the hearing is expected to provide more clarity in regards to her stance on the issue.

“I am pleased that Chairman Bono Mack is holding a hearing on the important issue of internet gaming,” Barton said. “It’s a first step to showing why the current law is a lose-lose for everyone — the public, the taxpayer, the banking industry, and the people who want to play online poker openly and honestly on the internet. I look forward to an open exchange of ideas.”

Since Tuesday’s hearing is not planned to debate any specific bill, another hearing may need to be held before the subcommittee followed by markup on Barton’s HR2366 bill before the full Energy and Commerce Committee would schedule a hearing on it.