Englishman Craig Simpson beat an international field of poker players to capture the €19,920 first prize in this weekend´s Super Poker Event of 2013. 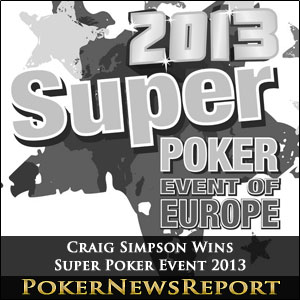 Englishman Craig Simpson beat an international field of poker players to capture the €19,920 first prize in this weekend´s Super Poker Event of 2013.

The Super Poker Event of 2013 may not have been that super in terms of numbers, but a patient performance by Craig Simpson saw him win the prestigious tournament hosted at the Citywest Convention Centre in Dublin.

When the nine-handed final table was set, it looked as if the tournament would be fought over by Craig Simpson (1,832,000 chips) and Lithuanian poker player Kasparas Klezys (2,350,000 chips) who, between them, had almost half the chips in play.

However, it took more than an hour for the first of the short-stacked players to relinquish the last of their chips (France´s Thomas Feredie) and a further two hours until the table became seven handed when Swedish poker player Nils Bergqvist was eliminated.

During this time Craig Simpson had taken over the chip lead, with Irish players Daryl McAleenan running into second at the expense of Kasparas Klezys (eliminated in seventh), Sammy O´Brien busting Markus Sippe in sixth and Jamie Brown moving into fourth when Daniel Heusborg was sent to the rail in fifth.

The conclusion of the tournament took a further two hours to complete. Jamie Brown took chips from both Daryl McAleenan and Craig Simpson before being eliminated in a 4 million+ chip pot which saw Craig Simpson take command of two-thirds of the chips in play.

Sammy O´Brien was eliminated in third after Craig Simpson flopped a heart flush in an A♠ K♣ -v- A♥ 8♥ confrontation and, going into the heads-up, Craig had 7.60 million chips in front of him as opposed to Daryl McAleenan’s 1.76 million.

Daryl McAleenan was unable to find the double ups he needed to get competitive in the heads-up and it was just a matter of time – 15 minutes in fact – until Craig Simpson won the Super Poker Event of 2013.