It is close at the top of the leaderboard for the $100,000 buy-in WPT Super High Roller, with James Courtney leading Joseph Cheong by less than 3 big blinds. 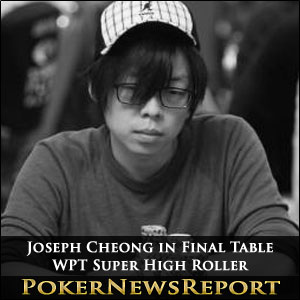 It is close at the top of the leaderboard for the $100,000 buy-in WPT Super High Roller, with James Courtney leading Joseph Cheong by less than 3 big blinds.

Day 2 of the WPT Super High Roller saw the event gather some pace after a lack-lustre opening day which saw only four eliminations and Steven Silverman pinch an early chip advantage over Yevgeniy Timoshenko.

However, entries (and re-entries) were still open through the first four levels of Day 2 and, by the time registrations had closed, seventeen players had ponied up the buy-in for the event – four of them twice – to create a prize pool of $2,047,500 which will be distributed between the final three players.

One of those players who had taken their seats when play first started on Tuesday was fastest out of the blocks yesterday – David ‘Doc’ Sands taking the early chip lead when eliminating Jason Mercier Q♣ Q♥ > A♠ 8♣ and then turning a Flush to send Ray Faltinsky to the rail (K♠ J♠ > 9♣ 8♣).

However, Sands was being chased up the leaderboard by James Courtney, who was also responsible for a couple of early eliminations – busting both Andrew Lichtenberger (K♥ K♠ > A♣ 10♣) and Bill Klein (A♠ K♣ > 5♠ 5♦) within a few hands of Level 10.

It was at this point that Joseph Cheong entered the event and made an immediate impression – doubling up against Yevgeniy Timoshenko with a rivered straight before flopping top pair with Q♥ J♣ to take a stack of chips from Steven Silverman.

Silverman Battles Back, but Courtney Closes on Top

Steven Silverman (Q♠ J♠) got his name back on top of the leaderboard when turning a spade Flush to cripple Andrew Robl, but Joseph Cheong was getting all the tail cards in his favour and won a 520,000 chip pot against Silverman when his 6♦ 2♦ turned a six-high straight.

Joseph Cheong took the chip lead for the first time in the event when he crippled Jean-Noel Thorel (8♦ 7♦ > K♦ J♥) with a rivered flush against Thorel´s rivered Queen-high straight and the river again came to Cheong´s assistance when the 3♠ gave him an Ace-Five straight to eliminate Erik Seidel A♣ 2♣ > K♣ 5♠ (Seidel had paired his 5♠ on the flop).

However, it was David Courtney who was to finish Day 2 of the WPT Super High Roller with the chip lead after flopping a King-high Flush in a three-handed pot against Cheong and Silverman, and then busting Yevgeniy Timoshenko in seventh (K♥ K♠ > 3♣ 3♦) to set the final table of six.

Only five levels were played yesterday – with play being halted during Level 13 (blinds 8,000/16,000 – ante 2,000) once the final table was set. While Andrew Robl and Daniel Perper are most at risk of a quick elimination, the remaining four players could provide a fascinating day´s play in pursuit of the $1,023,750 first prize.