The District Court in Munich has fined an online gambler €2,100 and confiscated €63,490 of his winnings for playing on a site not licensed in Germany. 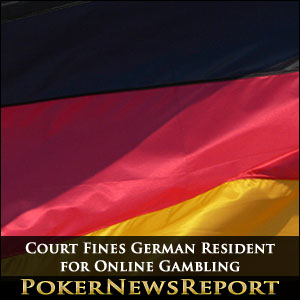 The District Court in Munich has fined an online gambler €2,100 and confiscated €63,490 of his winnings for playing on a site not licensed in Germany.

The unnamed twenty-five year old painter hit a hot streak at the Blackjack tables in July and August 2011, and had run his online bankroll up to €201,500 before deciding to withdraw the bulk of it.

Unfortunately, rather than being discreet about his winnings, he made several large transfers to his bank account, and then withdrew the cash from his bank account in huge quantities – alerting the German Financial Services Authorities.

A raid on the gambler´s home found €63,490 hidden in a shoebox in his attic and, after the punter explained where the money had come from, he was prosecuted for illegally gambling under §285 of Germany´s Criminal Code.

The online gambler protested his innocence, claiming that German stars such as Boris Becker were promoting online gambling in Germany and he believed that online gambling was legal. He added that the superior law (of the EU) which allows Internet gambling should supersede German legislation, as the site on which he had won the money was based in Gibraltar and had a UK operating license.

The judge at the District Court disagreed with him – stating that the EU Treaty gives individual jurisdictions the right to assess whether it is necessary to ban gambling and betting activities wholly or in part and restrict what online activities are allowed. Consequently the Internet gambling ban in Germany was not contrary to European law.

The judge also pointed out that the gambling activities that were being promoted by stars such as Boris Becker related to the legal activities of online sports betting. The judge said that even the man in the street would understand the difference between online gambling and sports betting; and, furthermore, the online gambler should have read the terms and conditions of the Gibraltar-based which read that the onus was on the player to determine whether or not online gambling was legal in his jurisdiction.

The decision by the Munich District Court is likely to be appealed because, at the time of the offence (2011), Germany had a state monopoly on sports betting which was subsequently found to be non-compliant with European law. The Interstate Treaty on Gambling also brackets sports betting in with poker and blackjack as a game of chance, and the opinion of the judge that the man in the street would understand the difference between online gambling and sports betting may not hold up on appeal.

Nonetheless, the fact that an online gambler could be prosecuted for playing on a regulated site that is not licensed in a particular jurisdiction sets a worrying precedent and emphasises the need for a transparent and reliable legal framework – not only in Germany, but throughout Europe. If online gambling sites were given a “European licence”, and player pools from ring-fenced countries were combined, this would solve all the issues that are currently holding back online poker in Europe.

Until then, it remains the responsibility of each player to read and understand the terms and conditions of each gambling website they use, and pay the consequences if they choose to ignore them!