PokerStars has announced a series of promotions to launch the countdown to its one billionth tournament – scheduled to be played on Sunday November 30th. 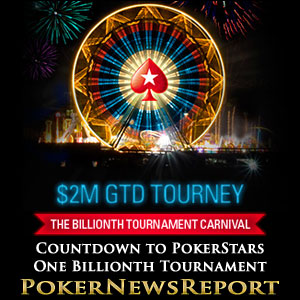 PokerStars has announced a series of promotions to launch the countdown to its one billionth tournament – scheduled to be played on Sunday November 30th.

In the run up to the historic event on Sunday November 30th, the world´s largest online poker site is running a series of promotions which – although having a familiar ring to them – have got bigger and better prizes than ever before.

The one billionth tournament itself will be a $109 buy-in event (satellites are available from $1.00) which will have a guaranteed prize pool of $2 million plus $200,000 of random prizes will be given away during the first two and a half hours.

The PokerStars´ one billionth tournament “Carnival” starts next Monday with a week of Milestone Golden Sit n Gos. From 10:00am (ET) on Monday, random Sit n Go games will be chosen to win Tier 1, Tier 2 or Tier 3 prizes.

Each time the cumulative total of prizes reaches a milestone (when $100K, $200K, $300K or $400K has been paid out) the Tier prize turns into a Milestone Reward, and players will win 10x the buy-in to the Sit n Go game plus a $100 cash prize. The prize pool will also be boosted by ten times the original prize money.

For the last Milestone Game (when the cumulative total of prizes reaches $500,000), players will win twenty times their buy-in, plus a $500 cash prize and the prize pool will increase twenty-fold. Once the $500,000 Milestone Game has been played, the Milestone Golden Sit n Go promotion will come to an end.

Tournament Guarantees to be Increased

During the second week of the promotion the guaranteed prize pools for the “Big”, “Bigger” and “Biggest” tournaments will receive a bump in value, plus there will be a total of $100,000 refunded in buy-ins over the week´s tournaments.

Players on up to 20 tables in each tournament will win a free tournament ticket equivalent to the value of the event they are playing in. The prize winners will be announced 40 minutes into each of the events and the winning players will also receive an email to confirm the prize they have won.

Fans of turbo tournaments are also included in the promotion, as the guaranteed prize pool for the “Hot”, “Hotter” and “Hottest” tournaments each day are having their guarantees increased by up to 200%, plus PokerStars is repeating the $100,000 giveaway of tournament tickets 40 minutes into each game.

PokerStars´ one billionth tournament gets underway at 13:00pm (ET) on Sunday November 30th and, in addition to the $2 million guaranteed prize pool, the site will be giving away more than $200,000 worth of cash prizes and tournament tickets.

The gifts – including Sunday Million tickets, Big $109 tickets and more cash prizes – keep on flowing every ten minutes thereafter until 15:30pm (ET), when players on six more randomly chosen tables will each win a $1,000 cash prize.

One billion tournaments is just so sick! I’ve played thousands of PokerStars tournaments over the years, and I learned so much from them, it definitely was a huge part of my success. After all these years I’m glad to see there are still huge prize pools and massive turnouts every day of the week on PokerStars. It really is the best place to play poker!

Last Chance to Get a PokerStars Bonus

The “One Billionth Tournament Carnival” starts just as PokerStars current Spin & Go promotion comes to an end and, as part of that promotion, PokerStars are offering all players a 25% reload bonus up to $150 on all deposits of $20.00 or more. In order to qualify for the bonus, players must make a deposit before 23:59pm (ET) this coming Sunday (November 16th) using the PokerStars bonus code “SPIN150”.

See you at the Carnival!