Could UB Pay Back Players Before Full Tilt Poker?

At last some good news for players who may have written off their UB/AP bankrolls. Let´s hope this does not deteriorate into another Full Tilt Poker saga. 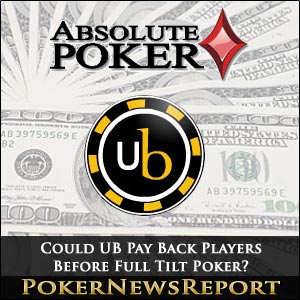 An announcement released by the Kahwanake Gaming Commission has raised hopes that Ultimate Bet and Absolute Poker could be paying some of the money back owed to players after their effective shutdown on Black Friday.

Since April, practically nothing has been heard from the online poker sites – with traffic practically coming to a standstill on the Cereus poker network. Now, the press release indicates that the parent company of the two beleaguered [geolink href=”https://www.pokernewsreport.com/online-poker-rooms”]online poker sites[/geolink] could be liquidating some of their own assets to facilitate the reimbursement of both US and non-US players.

The Statement in Full

Since the actions taken by the US Attorney’s Office for the Southern District of New York (the “SDNY”) on April 15, 2011, the Commission has been in close and regular discussions with its licensee, Blanca Games Inc. (“Blanca”), operating as Absolute Poker and UB.com (“AP/UB”), to facilitate the reimbursement of both US and non-US players. The Commission has also received regular updates of discussions between AP/UB and the SDNY.

Over the past several weeks, we were advised of a potential solution prepared by Blanca and its representatives, establishing a process to liquidate Blanca’s assets and distribute proceeds to players. We understand that this process has been presented to SDNY for consideration and approval.

The Commission’s foremost concern in this matter has been, and remains, the reimbursement of both US and non-US players, as quickly and completely as possible.

To avoid further prejudice to affected players, the Commission has demanded that all parties complete their discussions and implement a reimbursement solution without further delay.

The Motive behind the Announcement

Blanca Games, who only acquired the Cereus poker network, UB Poker and Absolute Poker in August 2010, also have a controlling interest in Helix Gaming International and BingoMania.com – two sites that would benefit from the regulation of online gaming legislation in the States. A considered motive behind the announcement issued by the Kahwanake Gaming Commission could be that the top brass at Blanca Games want to clear out any obstacle that might prevent some of their other brands from expanding Stateside in the future.

Whether Blanca Games has the assets to liquidate the $54 million it is alleged to owe to online poker players worldwide and be able to remain in business is another question. However, at least it would appear that they are doing something pro-active to pay back players, whereas the new “investors” behind Full Tilt Poker seem to be doing everything they can to avoid putting any money into the company – including asking poker players to buy shares in the disgraced online poker site. At last there is some good news for players who, by now, may have written off their UB/AP bankrolls. Let´s hope this does not deteriorate into another Full Tilt Poker saga.