Cory Zeidman has taken down event #4 at the World Series of Poker (WSOP) after a marathon heads-up clash against Sweden’s Chris Bjorin in Las Vegas. 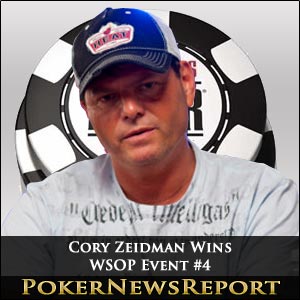 American Cory Zeidman has taken down event #4 at the World Series of Poker (WSOP) after a marathon heads-up clash against Sweden’s Chris Bjorin in Las Vegas.

Zeidman picked up $201,559 for seeing off the London-based Bjorin in the $1,500 buy-in Seven-Card Stud Hi-Low 8 or Better to end the third and final day of the tournament as champion – so ending the 55-year-old Swede’s dream of collecting a third WSOP bracelet, at least for now.

The original field of 622 players field created a prize pool of $839,700, but it was Florida’s Zeidman who left the Amazon Room at the Rio All-Suite Hotel & Casino as the champion to leave Bjorin disappointed but still $124,838 richer as the runner-up.

Having crippled Bjorin on the previous hand to leave the Swede with just 99,000 chips to his 2,700,000, Zeidman then completed the job for the title.

Now down to only 75,000 after posting the ante, Bjorin got it all-in on third street with the J♥. Zeidman was showing the 8♦ but was much stronger than it appeared, with the Coral Spring’s pro saying: I have pocket kings, to which Bjorin replied: I’m in very bad shape.

He was right as Zeidman showed K♠ K♣/8♦ 4♠ 2♠ 7♣ against his Q♦ 8♥/J♥ 10♦ 4♦ 7♠ – and, by the time the final card was dealt, Zeidman’s kings were still ahead, leaving Bjorin needing a nine to make a straight. The Scandinavian turned his last card over to see the Q♦, however, ensuring that a delighted Zeidman could celebrate before revealing the unimportant 2♥ on the river.

However, many of the railbirds gathered had actually come to see how Team PartyPoker Pro Sexton would fare after last year finishing as runner-up to Illinois’ Chris Viox.

Alas, the one-time WSOP champ was nursing a short stack and could not find a route back into contention. The last hand for the 64-year-old Hall of Famer saw him bring in for the full 8,000, only to see fellow American Michael ‘The Grinder’ Mizrachi raise that to 16,000.

Indiana pro Sexton wasn’t happy but made the call anyway, before check-calling a bet on the turn. Former Full Tilt Poker Pro Mizrachi moved in front on fifth street and then led out to put extra pressure on Sexton’s 23,500 stack.

Brisbane’s Waggoner – who is a member of the Australian Poker Hall of Fame – was eliminated as the final table bubble girl when losing out to fourth place finisher Yarron Bendor ($58,518).

The river 6♦ didn’t fill up Bendor, leaving Waggoner drawing live to a heart flush as her only hope of staying in the competition. However, her 9♦ river was no help as the final table was created.