Representatives of the Chicago Crime Commission and Illinois Gaming Control Board expressed concerns over efforts to expand gambling both online and live. 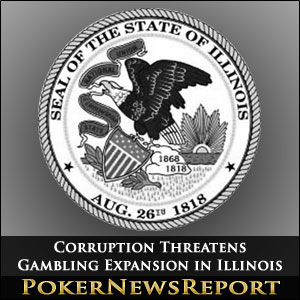 Representatives of the Chicago Crime Commission and Illinois Gaming Control Board expressed concerns over efforts to expand gambling both online and live.

A gambling expansion bill calling for online poker and casino games as well as allowing for five new casinos and slot machines at racetracks might oversaturate the state with gambling and make the industry hard to control, said Arthur Bilek, director of the Chicago Crime Commission.
Bilek voiced his concerns in a letter that was introduced at a hearing on the proposed expansion bill.

Without the necessary regulations being in place, there is every likelihood that organised crime and corruption will enter the gaming system and Illinois will suffer another blow to its national reputation,

The commission boss did not attend the hearing called for by Senate President John Cullerton to address grievances with SB 1739, referred to as the Riverboat Gambling Act.

Illinois Gaming Control Board Chairman Aaron Jaffe also cited problems with the massive gambling expansion proposal. He stated that the bill was much too broad and that the board is not staffed adequately enough to handle the increased workload required to exercise proper authority over the casinos and horse racing tracks, eGR reported.

Illinois, Chicago in particular, has long been known as a hotbed of corruption and crime. That unfortunate reputation began establishing itself as early as the 1920’s when Al Capone ran the Chicago Outfit, paying off public officials with bribes to operate his criminal enterprise. Corruption carried on throughout the years resulting in six state governors charged with crimes either during or after their stays in office. That includes former Governor Rod Blagojevich, who is serving a 14-year sentence for multiple counts of fraud tied to his attempt to sell the Senate seat left vacant by the election of President Barack Obama.

Current Illinois Governor Pat Quinn stated in a recent budget address that he was open to gambling expansion proposals, but would require language in the bill that would prohibit gaming companies from making campaign contributions in order to stave off corruption. However, Quinn is not entirely sold on Internet poker and gambling in the Land of Lincoln, stating that the issue needs to be fully reviewed.