Coren-Mitchell vs. Negreanu: Who Has the Better End of the Deal? 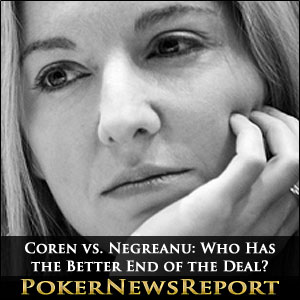 The poker community rejoiced when PokerStars Team Pro Vicky Coren-Mitchell announced that she ended her business relationship with the leading online operator in the niche. Many pros and recreational players alike praised Vicky’s integrity and decision to stick to her beliefs.

On Friday, Daniel Negreanu joined the party posting his own take on the matter. While he respected and admired Coren-Mitchell’s personal stance on online casino gaming, ‘Kid Poker’ didn’t see anything wrong with Amaya’s expansion in the online gambling market. He said that the game belongs to the casino environment and should be treated accordingly:

I would personally feel like a hypocrite if I justified that it’s OK for me to take money from problem gamblers, but it’s not OK for the casino to do the same. If it’s wrong, it’s wrong no matter who profits. As much as we’d like to separate poker from gambling, poker played for money IS gambling.

Negreanu went even further and explained that a recreational player who puts $100 at a blackjack table is going to win more often that he would at a poker table full of sharks:

He’ll lose either way of course, the only difference is who gets his money. The casino, or the shark players taking advantage of the disadvantaged recreational player.

Poker vs. Casino Games or Coren-Mitchell vs. Negreanu

Unfortunately, in his attempt to prove his case of not jumping off the PokerStars bandwagon, the Hall of Famer didn’t emphasize enough the basic difference between the game of poker and any casino game. While he mentioned that poker is indeed beatable and that the casino games are ‘unfair’ and ‘rigged’, he talked about the dream of becoming a pro as an illusion more often than not. Most of the wannabies-pro will eventually turn out to be losers who don’t have what it takes to climb the success ladder.

Victoria has a different view much more optimistic for the amateurs. She said on her blog:

I’m always careful to explain the difference between the essentially fair nature of poker, where we all take each other on with the same basic chance, and those casino games at unfavorable odds which can be (especially online) so dangerous for the vulnerable or desperate.

As opposed to Coren-Mitchell’s case, the two plus two community is much more divided when it comes to Negreanu’s views. Of course, the ‘same basic chance’ from Vicky’s blog can be thoroughly analyzed and discussed – the rake can make the game unbeatable for all players with only the house becoming the real winner or the toughness of today’s game where the chances are not that even anymore; the same can apply for Daniel’s ‘poker is gambling’ statement – YES, poker is gambling but gambling with skill involved. Mason Malmuth posted:

I do agree that poker is a form of gambling, one with a skill element that can produce a positive expectation for the better players. But I also think that the vast majority of players are winners and not losers. In fact, in a poker room like The Bellagio, where I sometimes play, my estimates is that if you took a snap shot of everything playing, the number of winners would be about 70 percent.

Another two plus two member and Supernova Elite grinder, Mike ‘MeleaB’ Brooks doesn’t agree at all with Negreanu saying that he ‘is manufacturing a situation’ – the fish sitting at a table full of regulars:

Whereas really, poker is a level playing field where – all else being equal – players have the opportunity to be net-winners in the long term; flair, work ethic, potential, and other factors permitting.

What Amaya needs to learn from all of these discussions and analysis is that for every action there is a reaction. When its action affects the player either directly – rake increase, FX margin – or indirectly – the launch of the casino games and sports betting – there will be consequences. So far these consequences won’t influence the cash flow much but if the actions attacking the winning player continue, the business will suffer in the long run.

GPI owner Alex Dreyfus posted on Black Friday a very interesting letter to ‘Santamaya’ with his wishes for 2015. One of those wishes targeting Amaya say:

I know that you take the best decisions that make sense for the company, for its shareholders, but I wish you to remember that the journey is long. Long term decisions will always pay better than short term ones.

Dreyfus also hopes that PokerStars won’t forget its motto – Find the Poker Star In You – and won’t make Party.Bwin’s and Betclic-Expekt-Everest’s expansion mistakes.

Bigger is not always better.