The California Online Poker Association (COPA) has disbanded following the lack of progress in the state’s online poker legislation efforts. 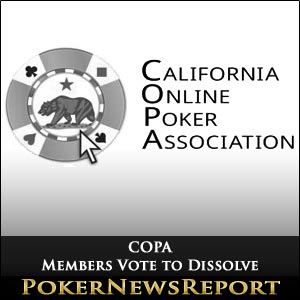 The California Online Poker Association (COPA) has disbanded following the lack of progress in the state’s online poker legislation efforts.

The membership consisting of 31 native tribes and 29 cardrooms throughout California had formed just a couple of years ago in an effort to secure the regulation of Internet poker in the state and ensure that all its members receive a share of the anticipated revenue. But the association operating agreement called for the possibility of the organization dissolving by Jan. 2, 2013 if online poker legislation failed to pass.

The 2012 legislative session concluded on Aug. 31 without enough support for SB 1463, the proposal of Senators Roderick Wright and Darrell Steinberg allowing for the legalization of online poker. The stalemate centers around the state’s gaming interests of Indian tribes, racetracks and cardrooms not seeing eye-to-eye on the Internet poker bill. The senators amended SB 1463 in hopes of pleasing all parties involved, but it was still not enough to win approval.

COPA’s membership began disintegrating when two of the group’s largest tribes–the San Manuel Band of Serrano Mission Indians and the Morongo Band of Mission Indians–departed from the association. A vote taken by the COPA board of managers following the exit of the two tribes revealed that other influential members were also in favor of disbanding.

The California Online Poker Association’s Board of Managers has announced it is dissolving the association. The decision was based upon insufficient progress within the legislature toward the passage of an online poker bill.

COPA was operating free-play online poker site Calshark.com in hopes of transitioning to real-money play upon passage of Internet poker legislation. Now that the association has officially dissolved, Calshark.com’s status remains uncertain. The Morongo and San Manuel tribes put up a large portion of the funding required to operate the site, but no announcement has been made regarding who will take over or if the site will continue operating.

Although COPA is no longer a unified front lobbying for approval of online poker in California, they still hold out hope that legislation will one day be enacted. Hightower said:

COPA’s members continue to believe that the authorization of intrastate Internet poker would provide California with hundreds of millions in new state revenue, thousands of new jobs and vital protections for players.

Sen. Wright has indicated that he will introduce a poker-only bill in the 2013 legislative session in the country’s most populous state. However, until Indian tribes, cardrooms and horse-racing interests can find common ground on the issue, the struggle to pass legislation will continue.