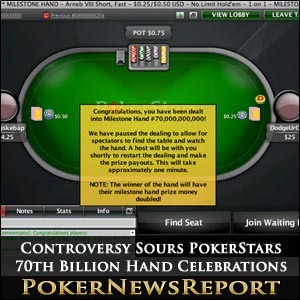 Accusations of cheating and collusion surrounded the PokerStars 70th Billion Hand promotions after a $70,000 bonus was paid to a player on a $0.25/$0.50 heads-up table who, with his playing partner, had been soft-folding his cards over the previous fifteen minutes.

Soft-folding is the act of folding your cards as quickly as you can in the small blind to present the prize to the big blind.

At the speed the two players were soft-folding their cards, they were seeing a new hand every three seconds. Eventually they hit the 70th billion hand and both players went all-in – “koenigskeba”´s A♠ J♣ beating “BeatUrOut”´s K♦ 5♦.

Colluders Could Have Played 28,800 Hands per Hour

It was estimated that if the two players had been multi-tabling the maximum 24 tables, they could have been “playing” 28,800 hands per hour without ever contributing to the rake ([geolink href=”https://www.pokernewsreport.com/pokerstars”]PokerStars[/geolink] has a “no flop, no drop” policy). This revelation set the poker forums and related social media alight, with calls for PokerStars to strip the colluders of their prize and distribute it to other prize winners in the promotion. Many outraged online poker players were quoting from the terms and conditions of the promotion, which clearly gave PokerStars the right to revoke the prize under the circumstances.

Once they had been made aware of the situation; PokerStars conducted an investigation and issued the following statement:-

We have reviewed the circumstances around the winning hand and have determined that, while this practice of ‘fast-folding’ may not be in the spirit of the promotion, it does not violate the rules and regulations of the promotion. As such, we have honoured our promotional award. Please note, we are reviewing the format of the promotion to try to minimize this kind of activity in future milestone hand promotions. We’ll provide more information on this in the near future