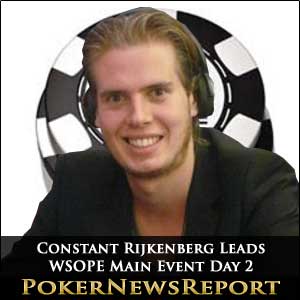 Dutch poker player Constant Rijkenberg took the second day of the WSOPE Main Event by stealth yesterday – using river-raising tactics to take several substantial pots uncontested before claiming a monster at the end of the day.

He and US Poker player Hoyt Corkins were the only two players to close the day with more than 400,000 chips after 6 more levels of play, which saw the field reduced from 327 to just 115.

The Rise of Rifat Palevic

Constant Rijkenberg and Corkins were not the only two players to get above 400,000 however. For much of the day Sweden´s Rifat Palevic was ahead of the tournament by a mile – a fantastic achievement considering he was on the same table as Jake Cody, Sam Holden, Robert Mizrachi, Johnny Chan and Yevgeniy Timoshenko. Indeed it was Cody that initially chipped Palevic up after the Englishman had flopped a set of Deuces only to see Palevic catch a rivered heart flush.

The Fall of Rifat Palevic

Palevic´s aggression had put him in the position where he had 50% more chips than any other player, but it was also the cause of his downfall. Setting Vadim Ifergan all-in when holding 7♦ 7♣ on a flop of 9♥ 8♣ 6♦, Ifergan tabled A♣ 9♣ for top pair and when the J♦ 2♠ completed the hand, Palevic had just given back 150,000 chips. An hour later Palevic lost 50,000 more chips with air against Hoyt Corkins (Two Pairs – Queens and Tens) after three streets of aggressive continuation betting, and finished the day in third position.

Despite losing the big hand above to Palevic, Jake Cody leads the British assault on the WSOPE Main Event title. Having taken a few chips back from Palevic and taking a bite from Johnny Chan, Cody doubled up against Vadim Ifergan when his pocket Aces held against the Frenchman´s pocket Tens and then eliminated Johnny Chan when his KK held against Chan´s 33. Andy Moseley, Matt Frankland and James Dempsey also feature among the top twenty players at the end of Day 2, out of 13 UK poker players who remain in the tournament.

One of the best plays of the day by a UK poker player came from Hendon Mob member Barny Boatman. Barny raised from the hijack seat with 3♠ 4♠ and got three callers. He raised again after the J♣ 3♣ 4♦ flop and was called by the big blind. The K♠ on the turn gave Barny two pairs and the flush draw and he was check-raised up to 14K. The J♥ on the turn prompted a bet of 34K from the big blind and Barny called – a great call as it turned out as his two pairs held and elevated Barny up to 180,000 chips.

Could Bordy Be Right?

Another UK poker player performing admirably was James Bord. The defending WSOPE Main Event Champion was a little down on his chips in the last level of the day before pulling a “Champion” bluff (Bordy´s words) against Sergey Tikhonov to double up to 70,000 chips. His pre-match prophecy that an American would not win the WSOPE Bracelet seems to be coming to fruition, as only 28 of the 115 players who remain in the tournament are based in the USA – and only two of those in the top 10.

When play resumes at the Le Croisette Casino in Cannes this afternoon, play is schedule for 6 levels of 90 minutes. Blinds will be 1,200/2,400 and the average chip stack is 154,696. An intriguing day is in prospect as we head towards the bubble – the top 64 players get paid – and possibly the biggest headache of the day will belong to Bertrand Grospelier, captain of Team Europe, who will have to find a replacement for Jake Cody in the Caesar´s Cup if Cody´s deep run continues.