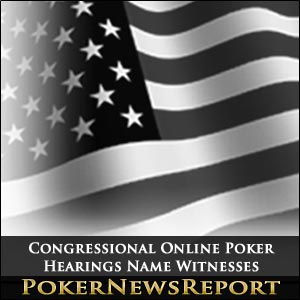 The witnesses slated to testify at online poker hearings scheduled in the Senate on Thursday and before the House of Representatives on Friday have been named.

D’Amato and Stevens both testified at the hearing last month before the House Subcommittee on Commerce, Manufacturing, and Trade that debated the issue of consumer protection in online gaming. This will be their first appearance as witnesses on internet gaming before the Senate. However, D’Amato served three terms as a senator representing New York state.

The hearing is expected to discuss four main issues:

We will provide news regarding the results of both hearings as warranted.