Congressional Hearing On Online Gambling Set For Next Week

The U.S. Senate Committee on Indian Affairs has announced that an oversight hearing on Internet gambling will be held Thursday, July 26. 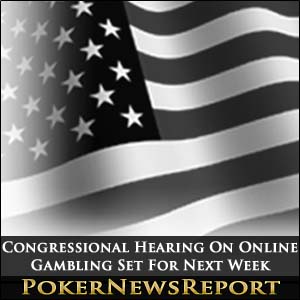 The U.S. Senate Committee on Indian Affairs has announced that an oversight hearing on Internet gambling will be held Thursday, July 26.

The topic to be discussed will be the Regulation of Tribal Gaming: From Brick & Mortar to the Internet. This will be the third time this committee will have held a pow-wow on the effect of online poker and gambling on the country’s many Indian tribes.

The first hearing was held in November of last year and was entitled Future of Internet Gaming: What’s at Stake for Tribes? It was apparent from this meeting that Indian tribes don’t agree on whether the legalization of online poker and gambling will benefit their interests. This theme was reinforced by Tulalip Tribe Vice Chairman Glen Gobin who testified that his tribe sees legalization of internet gambling as a direct threat to the development of Indian country.

Poker Players Alliance (PPA) Chairman Alfonse D’Amato downplayed Gobin’s fears, insisting that online poker will not have the kind of devastating impact that Gobin is legitimately concerned with. D’Amato pointed out that only 1% of all of the revenues at Indian casinos come from the poker tables and that evidence shows that the legalization of Internet poker actually will increase the participation in live play.

The second hearing was held in February and focused upon the U.S. Department of Justice Opinion on Internet Gaming: What’s at Stake for Tribes? Committee members tackled the issue of the DoJ ruling in December that found the 1961 Wire Act to be applicable to only sports betting. Tribal interests again expressed their concerns about online gambling legislation, with Seneca Nation of Indians President Robert Odawi Porter believing that regulation on either the state or federal level will permit government and influential companies to shove Indian gaming away from the table.

Other witnesses, including Patrick Fleming, the PPA’s Litigation Support Director, again tried to ease the fears of tribal interests who see online gambling as a direct threat to their source of revenue. Perhaps the greatest voice of reason to emerge from that hearing was that of Kevin Washburn, the University of New Mexico’s Dean of the School of Law Administration, who said that the DoJ ruling has created a chaotic atmosphere that will result in a mishmash of online gambling regulations by individual states. Washburn suggested that the best scenario for everyone involved would be online gambling regulation at the federal level.

A list of testifying witnesses has yet to be announced for Thursday’s hearing, which will be held at 2:15 p.m. in Room 628 of the Senate Dirksen Building, and can be viewed over the Internet via webcast.