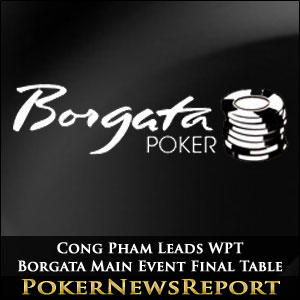 The penultimate day of the WPT Borgata Poker Open Main Event produced some truly memorable poker, some astonishing decisions and heartbreak for thirty of the thirty-six players who held dreams of appearing on the televised WPT Borgata Main Event final table.

The venue for the penultimate day´s action was the high stakes room of the Borgata Casino while TV crews were preparing the ballroom for the final table set, and while several players obviously felt more comfortable with their surroundings (it is a second home for about a dozen of them), it did not necessarily help everyone´s performance.

Selbst Off to a Flyer but Lucky to Stay Alive

Yesterday we mentioned how Vanessa Selbst was charging up the leaderboard, and on Day 4 she took the chip lead in the third hand of the day – getting three streets of value with flopped trip Kings against Jake Schwartz´s pocket Queens. Selbst continued to chip up and stayed among the chip leaders throughout the day, but could have been eliminated from the event when only eleven players remained:-

Selbst got into a mini-raising pre-flop battle with Tyler Gaston, and there was half a million chips already in the pot when the flop of J♣ 8♣ 6♠ was dealt. Gaston check-raised Selbst up to 725,000 chips, and Selbst responded by moving all-in for 3.3 million chips. Gaston called, and the cards were on their backs.

Selbst continued to run hot as the A♠ was dealt on the Turn, and Gaston did not find his two-outer on the River (5♦) that would have bust Selbst from the WPT Borgata Poker Open Main Event. However, winning the huge 7 million chip pot only put Vanessa Selbst in second place overnight as Cong Pham continued to dominate the tournament.

Cong Pham started Day 4 of the WPT Borgata Poker Open Main Event as chip leader and – other than the hour or so that Vanessa Selbst had the advantage – stayed at the top of the chip counts throughout the day. Furthermore, whereas Vanessa Selbst chipped up into second busting only one player from the tournament (below), Pham was in phenomenal form.

Pham bust out Joshua Gibson (Q♣ Q♥ > K♣ 10♦) and Edwin Torres (A♦ A♠ > 6♥ 6♠) in the second level of the day, and then found Aces again to eliminate Jake Schwartz A♣ A♦ > K♦ 5♦ to reduce the field to 20. Despite doubling up a couple of short stacks, Pham used his chip advantage to bully players out of valuable pots and quickly leapt up to 6 million chips, then 7 million chips, then 8 million chips.

Pham reached the 10 million chip mark with the elimination of Alex Rocha. Pham (K♦ 3♦) had flopped two pairs, but was behind Rocha (K♣ K♠) who had flopped a set of Kings. However, by the time all the chips had gone into the middle, Pham had improved to a King-high flush and Rocha was sent to the rail in eleventh place.

And our Other Four Contestants are …

As the ten remaining players formed one single table, the players behind Pham and Selbst battled to stay in the game. David Randall bust Tyler Gaston in tenth when his Q♥ J♠ spiked the Q♥ on the River to best Gaston´s pocket Fives, and then Eric Fields (A♣ K♣) flopped two pairs to end Cliff Josephy´s (8♦ 8♥) title aspirations.

Anthony Zinno owes his place at the final table to two big pots he won in consecutive hands against Cong Pham and Richard Tatalovich before Vanessa Selbst sent Tatalovich to the rail in eighth A♣ 10♠ > K♠ 10♣. The final table of six was set in the first hand of Level 31 (blinds 50,000/100,000 – ante 10,000) when Dan Howe moved all-in with A♥ K♦ and was called by Jeremy Kottler (K♥ K♠). An Ace failed to appear on the board, and Howe was out of the WPT Borgata Poker Open Main Event in seventh place.